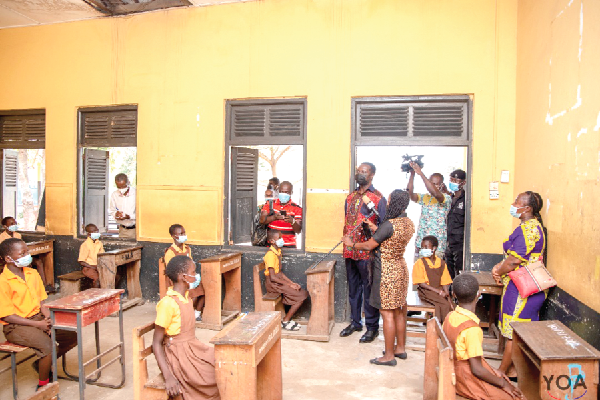 A total of 470,768 took part in the test, which has been introduced under the Education Strategic Plan (ESP), to provide feedback to address learning poverty.

As part of the ESP, the NST will be conducted once every two years to provide stakeholders in the education sector with relevant data to address learning variations by region, gender, location and school type.

On a tour to assess how the exercise went, the Minister of Education, Dr Yaw Osei Adutwum said the test was part of efforts to help the ministry and Ghana Education Service (GES) know the real challenges of primary education and help implement interventions to improve upon quality education in public schools, reports Emmanuel Bonney.

“The NST is not a promotional exam, however, it will feed the Ministry of Education and other stakeholders in the sector with relevant data to address learning poverty,” the minister said.

The tests
The pupils were tested on English Language and Mathematics, which sought to ascertain the subject strength and weaknesses of the pupils with regards to the new curriculum.

Instead of writing in their various schools, the test was conducted at centres created for the various communities.

During a visit to the Osu Presbyterian Cluster of Schools examination centre, Dr Adutwum, encouraged the pupils to take their studies seriously.

As the pupils waited for the test in Mathematics to commence, he told them not to be afraid of the subject since it formed part of their everyday life activities.

“Why are you afraid of Mathematics? Maths is life and everything you do is about it. So Maths should not be something that makes you afraid at all,” he emphasised.

He said the NST was an initiative of the government to assess how pupils were doing in numeracy and literacy.

“In this country, the first time at the national level we get to know about students’ performance is after 11 years of education which is two years of kindergarten, six years of primary school and three years of junior high school(JHS). That is when the nation gets to know whether the students were doing well or not,” he said.

In other places where education was thriving and doing well, he said there was an early assessment, and that this year primary pupils were being assessed to see how well they were doing in English and Mathematics after which interventions would be put in place for those who did not do well in primary five.

In primary six, he said, they would be tested again to look at their performance.

“So this is an initiative that is supposed to help Ghana achieve academically and at the same time ensure that we give the opportunity for intervention. So the data that is going to come out of this examination is going to be used by the GES to plan professional development for teachers to improve their skills,” he said.

Regarding the involvement of private schools, he said the ministry did not want to impose it on them and that next year it would dialogue with them and once they were interested they would be part of it. 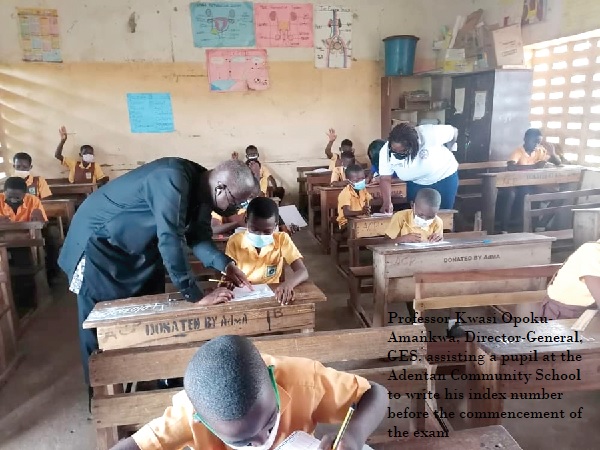 Prof. Opoku-Amankwa explained that the examination was an assessment for learning and of learning, saying, “It will help us to assess learning itself and how we do our teaching.”

The Greater Accra Regional Director of Education, Ms Monica Ankrah said 48,745 pupils sat for the test in the region and that out of the number, 242 pupils sat at the Osu Presby Centre.

“So far, the challenge we faced was with the distribution of the question papers. In fact, we had to go to the West African Examinations Council (WAEC) to take the papers and that delayed a little.

“But the children are so ready to write the test, looking at their demeanour,” she said, saying that there was no absenteeism.

A total number of 1,859 candidates, made up of 927 males and 932 females wrote the test in the Tema Metropolitan Area in the Greater Accra Region, Benjamin Xornam Glover, reports from Tema.

At the Twedease Primary School centre, a delay in the arrival of question papers created anxiety among some of the pupils who turned up at the centre well ahead of the 9 a.m., when the exams were scheduled to take off initially.

The majority of the candidates reported at the centre with great zeal and enthusiasm for the examinations as early as 6:30 a.m.

Jemima Achivors reports from Ho that 33,629 basic four pupils took part in the examination conducted at 132 centres across the Volta Region.

The Supervisor, Mr Richmond Gyamfi, told the Daily Graphic that the arrival of the examination papers delayed; hence, the commencement of the first paper two hours late.</>

He explained that the travel time for some pupils to their designated examination centres also contributed to the delays.

At the Mawuli E.P. Basic School, the Supervisor, Mr Godsway Ankude, said the school's 295 pupils who took part in the examination was a testament and a call to ensure that positive learning outcomes at public basic schools were achieved.