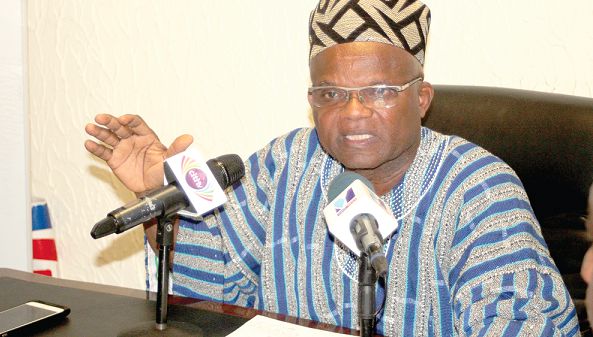 The Local Government Service (LGS) has begun processes to recruit 2,200 technical staff into the metropolitan, municipal and district assemblies (MMDAs) in selected regions in the country.

The Head of the LGS, Nana Ato Arthur, who announced this at a press conference in Accra last Friday, said the process would be completed by the end of June this year and postings done immediately.

“The Office of the Head of the Local Government Service (OHLGS) received about 61,000 applications, out of which 40,000 applicants were qualified, but we need only 2,200.

“As of now, the management of the OHLGS and the council have agreed to use the random sampling method to select 4,000 applicants out of the 40,000 for interviews to be conducted over the next four weeks.

Ten panel members have already been set up for that purpose," he added.

The Ministry of Finance gave clearance to the OHLGS to recruit 2,200 staff in January this year.

Those to be recruited include assistant programmers, assistant administrators, internal auditors and procurement, budget and social development officers.

A group calling itself ‘Coalition of Local Government Job Applicants’ had earlier accused the OHLGS of delays in the recruitment process after "amassing wealth" from their applications.

In a petition, the group accused the OHLGS of selling 61,000 application forms when only 2,200 staff were needed.

It also accused the service of selling the Public Services Commission (PSC) Form Two to them at GH¢10 when it was supposed to be for free.

Nana Ato Arthur described the concerns by the group as "pure mischief and calculated lies".
According to him, the OHLGS had no hand in the sale of the PSC forms to the applicants.

"The PSC Form Two was available for applicants to upload their applications for free, but those who could not access it bought the hard copy at the Assembly Press at GH¢10.

The OHLGS does not have a share in the amount that was realised from the sale of those forms by the Assembly Press," he stressed.

Nana Ato Arthur also said the OHLGS was not unduly delaying the recruitment process, as had been stated by the group, and explained that due diligence was being done to ensure that only competent people were recruited.

Answering a question on why the OHLGS decided to use random sampling for the selection of applications for the interview, he said the cost of the conduct of an aptitude test was unbearable for the service.

According to him, the West African Examinations Council (WAEC) demanded GH¢25 per applicant for the aptitude test, "which would have cost us so much, but we do not have such money".