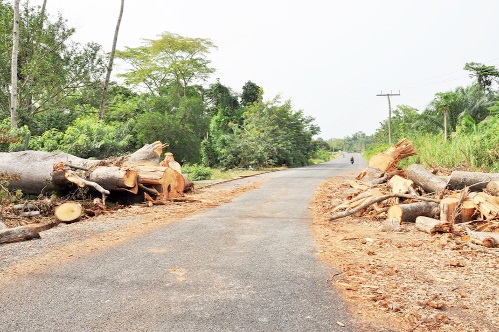 Life has returned to normal at Anfoeta in the Ho West District in the Volta Region after a 100-year-old ‘odum’ tree which fell across the Dzolokpita-Bame road during a heavy storm on March 14, was cleared by local townsmen.

The economic activities of the people of Anfoeta depend heavily on the tarred road which runs through the town.

The high-tension electricity cables which were destroyed by the falling tree have also been restored.

The incident blocked the movement of about 70 vehicles on the road for a whole day.

Meanwhile, two men who were wounded by debris from a falling roof at the local E.P. Church mission house have been treated at a health post and discharged.

About a dozen other houses were damaged during the severe rainstorm.

The roof of one of the six-unit classroom blocks of the Anfoeta E.P. Basic School, which was carried away by the storm has also been fixed through communal labour.

The DCE, Ernest Victor Apau, visited the school and the other disaster scenes last Tuesday.

The Assistant Headmaster of the school, Agbenyega Danyo, told the DCE that the school had an enrolment of 273 pupils, and that they were back in the classroom for their lessons.

Mr Apau expressed misgivings over the putting up of houses by some residents without any consideration for building regulations.

He noted that the houses which were damaged by the storm were built without the necessary safety precautions and construction expertise.

Mr Apau said the assembly was set to assign a task force to identify structures which were put up without the necessary building permits from the assembly and deal with the culprits swiftly according to the law.