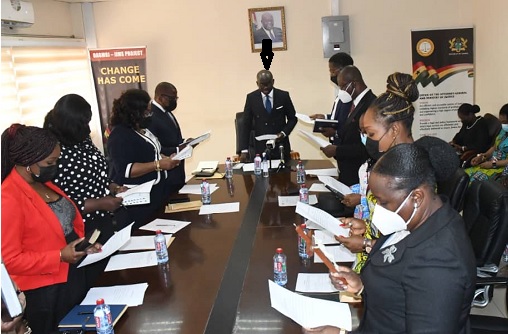 Mr Godfred Yeboah Dame (arrowed), the A-G and Minister of Justice, administering the oath to the new board members Follow @Graphicgh

The Attorney-General and Minister of Justice, Godfred Yeboah Dame, has tasked the Governing Board of the Office of the Registrar of Companies (ORC) to leverage the new Companies Act, 2019 (Act 992) to aid in the fight against corruption and money laundering.

That, he said, would boost investor confidence in the economy.

“I am firmly of the conviction that when effectively managed, the Registrar of Companies can, indeed, be a strong partner of the government in the fight against corruption and the promotion of good governance in the country,” he added.

Mr Dame made the charge when he swore in the new board in Accra last Friday.

The 10-member board is chaired by Mr Seth Kwasi Asante, a corporate and financial law practitioner.

The A-G said the Office of the Registrar of Companies, besides its other responsibilities, was also required to appoint inspectors, a receiver or manager to ensure effective compliance with Act 992, discharge its duties and perform functions of the Official Liquidator under the Bodies Corporate (Official Liquidations) Act, 1963, Act 180, including managing the finances and fixed assets of the Office of the Registrar.

“By virtue of a variety of measures introduced by Act 992 to ensure the timely provision of information to be entered into the companies register, processes to verify information provided by companies to the Registrar of Companies, as well as provisions directing access to information contained in the register, the Office of the Registar of Companies has become a veritable partner of the government in its effort to root out corruption.

“The phenomenon of the creation of shell companies and opaque financial systems that provide opportunities for the laundering and concealment of illicit wealth is being drastically reduced by the enactment of Act 992 of 2019,” he said.

The A-G further said Section 352 of Act 992 required the Office of the Registrar of Companies to be financially autonomous.

On behalf of the members of the board, Mr Asante expressed appreciation for the opportunity to serve and said “there are significant challenges that we, as board members, will have to surmount to execute our mandate successfully”.

He mentioned the digitalisation of the Registrar’s Office and the modernisation of the entire administration of companies as some of the issues they would tackle.