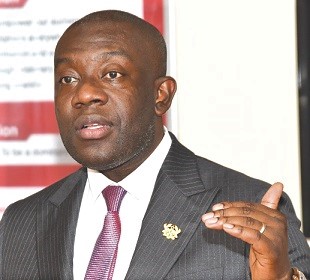 The Minister for Information, Kojo Oppong Nkrumah, has urged the Majority and the Minority sides in Parliament to work in close collaboration to get a feasible budget programme that will propel the economy onto the path of recovery.

In a post on social networking site, Twitter, the minister hinted that the government’s economic blueprint for next year, which will be presented to Parliament tomorrow, would focus on prudent economic policies that would help reboot the economy and, therefore, needed the collaboration of both sides of the house.

“The 2023 budget is supposed to be the foundation of our recovery. The Majority and the Minority will have to work together in the national interest to arrive at a feasible budget programme,” he tweeted.

Hinting on some key pillars of the budget, Mr Nkrumah said it would focus on restoring macroeconomic stability, arresting the escalating cost of living, achieving moderate growth and completing ongoing government projects across the country.

He said the budget statement was a prerequisite for securing an IMF deal, for which reason it must be carefully crafted to get the buy-in of all segments of society.