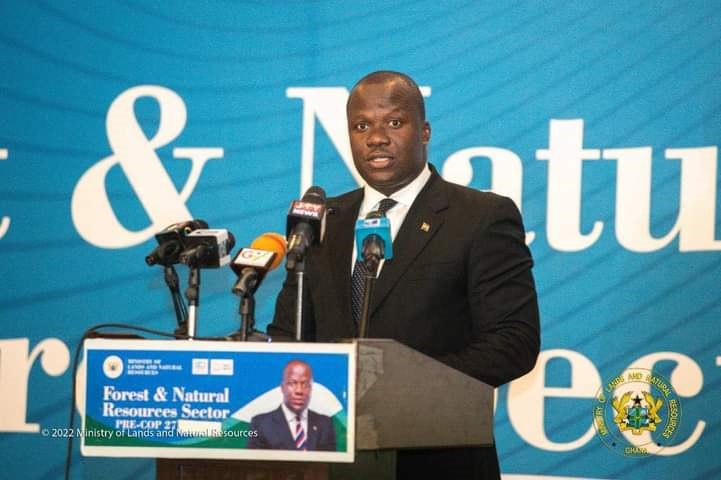 The Minister of Lands and Natural Resources, Samuel Abdulai Jinapor has called on all stakeholders who will be participating in this year's United Nations (COP27) climate change conference to collaborate with the Lands Ministry to ensure and achieve the needed climate action results.

He said since the impact of climate change was cross-cutting, it was important for the various actors in that space to have a united front to push for a common goal at the global platform.

COP27 is scheduled to take place in Sharm El Sheikh, Egypt, from November 6 to 18, with President Nana Addo Dankwa Akufo-Addo expected to join President Joe Biden of the United States and other Heads of State and government at a Forests and Climate Leaders’ Summit, on November 7 to officially open the event.

At a pre-departure cocktail organised for the local COP27 delegates in Accra Thursday, Mr Jinapor called on the delegates to support efforts by the government to promote forest and climate-based initiatives to tackle climate change.

The event was attended by members of the diplomatic corps, foresters, representatives of related ministries, departments and agencies (MDAs), members of the business community and ither stakeholders.


Underscoring the importance of the COP27 pre-departure event, he said the initiative created a platform for stakeholders to share ideas and contribute to discussions on the country’s expectations.

He said such a platform was critical because it would help to build on the momentum garnered at COP26 last year.

Mr Jinapor disclosed that with the help of the World Bank and the partnership for Forest, Ghana had secured a pavilion at Sharm El Sheikh to showcase the country's climate actions.

The minister said the country’s COP27 pavilion would also be a good platform to woo investors and have partnership engagements.

Again, he said some side events have been lined up to take place at Ghana’s pavilion at COP27, including office of the Presidency.

Apart from this, he said there would be a roundtable tropical forest ministerial event to be hosted by the Lands Ministry to discuss forest solutions to climate change.

Mr Jinapor noted that a key engagement at COP 27 was Ghana's participation in the Forest and Climate Leader's Partnership (FCLP), a COP26 Presidency initiative which was intended to give steam to the Glasgow declarations on forest and land use.

He added that the FCLP would create a platform for members states to scale up forest conservation and restoration action to implement climate solutions and provide sustainable development.

Additionally, he said the partnership wouod provide the opportunity for inter-governmental collaboration and coordinated action with partners and stakeholders.

The minister said Ghana's membership of FCLP was a testimony that the country’s efforts to accelerate emissions reductions had been recognised globally.

He disclosed that through these efforts,  Ghana was set to receive some US$4,862,208 as payment for the country’s efforts in reducing carbon in 2019.

Mr Jinapor said communities would realise the result of their immense contributions to forest conservation because when the benefit was shared, it would boost their confidence in government climate interventions

He underscored the need to scale up forest and other nature-based solutions to tackle emissions, most if which emanated from agriculture, forest and land use activities.

For her part, the United Kingdom High Commissioner to Ghana, Harriet Thompson, disclosed UK'S support towards series of events on forestry at COP27 as well as the Forest and Climate Leaders Partnership.

"Ghana will be represented at the UK's Forest Agriculture Commodity Trade Dialogue to update on progress one year from its launch at COP26.

There is also the Cocoa Forest Initiative event to mobilize action from global chocolate makers and cocoa companies, with the Government of Ghana taking part," she said.

Ms Thompson said given that the annual deforestation rate in Ghana was 3.5 per cent with her forests under threat from agricultural expansion and illegal mining, it was important to tackle the challenge head on.

She noted that tackling the menace would require "a huge, complex and sustained effort" that recognised how climate, poverty, and business interests all interact both as part of the problem, and, ultimately, as part of the solution.