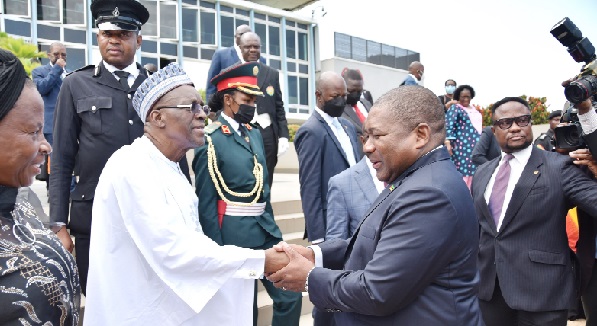 The visiting President of Mozambique, Filipe Jacinto Nyusi, has called for joint efforts across the world to fight the upsurge of terrorist activities.

He said no country in the world was immune to terrorism, hence the need for united efforts to fight the global threat to peace and security.

Mr Nyusi made the call when he addressed Ghana’s Parliament in Accra on May 25, 2022.

Mr Nyusi, whose address in Portuguese was translated into English, said terrorism was a complex phenomenon which all countries could not consider themselves as immune to due to its transnational characters.

“The fight against terrorism requires commitment and joint efforts of all countries,” he stated.

He cited a terrorist attack in the northern districts of Mozambique in 2017 that resulted in the murder of more than 2,000 civilians and displaced over 850,000 others to buttress his point, adding that the attack also affected the development of the oil and gas industry of the country.

He noted that with the support of the Mozambican forces and some French troops, the country was able to neutralise the terrorist groups’ attacks to pave the way for the reconstruction of the province and the return of the people who fled the attacks.

The Mozambican President said his country and Ghana had some historical ties which would be deepened over the period of his visit.

He stressed the need for African countries to trade among themselves to achieve their economic independence, stressing that economic and regional integration must remain a top priority for the continent, if it wanted to achieve economic emancipation.

He said his visit had resulted in the signing of bilateral cooperation with Ghana and his country in the various sectors of the economy, including agriculture, trade and industry, tourism, mineral resources, science and technology, among others.

He called for consensus building among the various political actors for a sustainable development of the country, adding that his entourage was also in the country to learn to improve on their democracy after adopting the decentralisation system.

The Speaker of Parliament, Alban Bagbin, thanked the Mozambican President for his visit to Parliament, saying it was the second time the House had received Presidents from former Portuguese colonies after that of the President of Angola.

The leadership of both the Majority and Minority sides of Parliament, who took turns to respond to the address by the Mozambican President, stressed the need for an increase in trade among African countries to achieve concrete economic empowerment.

The Minority Chief Whip, Alhaji Mohammed Mubarak Muntaka, who spoke on behalf of the Minority leader, Haruna Iddrisu, called for increased trade among Africans to break the over-dependence on, particularly, Europe.

He also called on African leaders to see terrorism as an African problem and work together to stop the spread of the phenomenon in Africa.

The Majority Leader, Osei Kyei-Mensah-Bonsu, said the bilateral cooperation between the two countries would further deepen the trade and economic ties of Ghana and Mozambique for the benefit of their peoples.