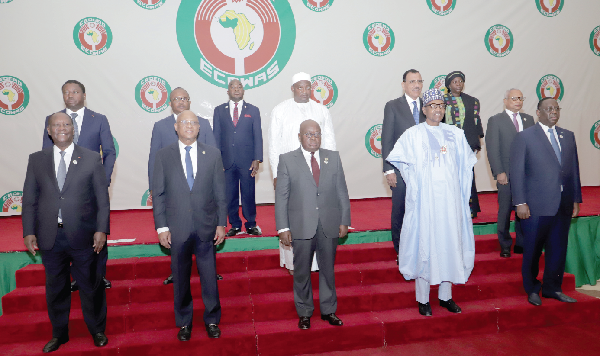 The 60th Ordinary Session of the Authority of Heads of State and Government of the Economic Community of West African States (ECOWAS) has opened in Abuja, Nigeria, with President Nana Addo Dankwa Akufo-Addo urging member states to rigorously pursue national and regional efforts to fight the COVID-19 pandemic.

In line with that, he encouraged member states to pursue the domestic production of COVID-19 vaccines, not only to protect their citizens but also help grow the economies of the bloc.

The session, which began yesterday, will deliberate and take decisions on political, socio-economic and security issues affecting the region.

As of last Wednesday, the region had recorded 674,556 cases of COVID-19 infections, with some 10,000 deaths, impacting all sectors of the economy.

The region risks a new wave of the pandemic with the emergence of the Omicron variant that has been found in three member states.

President Akufo-Addo said it was unfortunate that the discovery of the Omicron variant in the region had led to the imposition of travel bans “which are unjustified and unacceptable".

He also expressed worry over the unavailability of vaccines, saying "despite our efforts, we have only six per cent of our population receiving one dose, with two per cent of the population being fully vaccinated”.

President Akufo-Addo condemned pockets of insecurity in the region, particularly the deadly terrorist and kidnapping attacks in Mali, Niger, Burkina Faso and Nigeria, which he said had caused many casualties among civilians and the security forces, resulting in a significant number of displaced persons.

“We must step up efforts to deal with these attacks which have been imposed upon us, and we must act in such a way that no one will doubt our resolve to protect our people and the peace and stability of our countries,” he said.

The President congratulated the governments and the people of Cape Verde and The Gambia on the successful conduct of their elections, which he described as credible, peaceful and transparent.

He said the Abuja meeting would firm up remedies for the transition challenges in Mali and Guinea after their suspension from ECOWAS, as he also welcomed the release of President Alpha Conde of Guinea.

He expressed appreciation to his colleague Presidents for their support for the election of Ghana onto the non-permanent seat on the UN Security Council for the years 2022 and 2023.

“Indeed, because of your support, Ghana obtained the highest votes. We will make sure that Africa’s voice is heard loud and clear in the deliberations of the council, both on matters affecting the continent and on global issues, and we will consult broadly to define Africa’s interests,” he added.

The ECOWAS Chairman further urged member states to remain “united and pool our resources and energies to accelerate and strengthen our regional integration”.

“Our commitment to this goal has allowed us to successfully tackle most of the obstacles we have faced. Solidarity has been the backbone and the strength of our community in our 46 years of existence, and it is needed now,” he said.

The meeting will consider, among others, the 2021 ECOWAS annual report, the report of the 47th Ordinary Meeting of the Mediation and Security Council and the report of the 87th Ordinary Session of the ECOWAS Council of Ministers that includes the proposal to open land borders on January 1, next year.

It will also make a declaration on the climate and the appointment of an ECOWAS Champion for the return of cultural artefacts.

It will also consider a special report on the ECOWAS single currency programme to be delivered by Ghana’s Finance Minister, Mr Ken Ofori-Atta, who chairs the ministerial committee on the single currency.

The Minister for Foreign Affairs and Regional Integration, Ms Shirley Ayorkor Botchwey, who also chairs the ECOWAS Council of Ministers, will present the report of the Extraordinary Session of the ECOWAS Council of Ministers on proposals for the allocation of statutory positions of the seven-member commission, its organisational chart and the streamlining of operational costs.