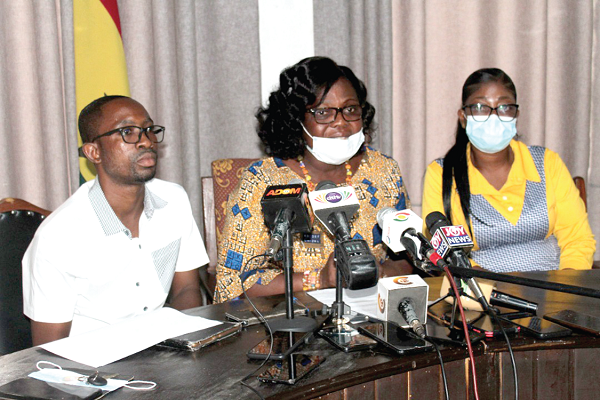 The Bono Regional Minister, Mrs Justina Owusu-Banahene, has appealed to chiefs and people in the region to help her build on the achievements of her predecessors.

According to her, there were several untapped tourism attractions in the region which should be developed to generate revenue for the development of the various districts and municipalities.

Mrs Owusu-Banahene, who was speaking during her maiden interaction with the media in Sunyani last Wednesday, also pledged to collaborate with the media to enhance the general development of the region.

She mentioned the Menji Crocodile Pond and the Hani Archaeological Site in the Tain District, the Duasiden Monkey Sanctuary in the Dormaa Central Municipality and Nchiraa Waterfall in the Wenchi Municipality as some of the untapped tourist attractions in the region.

“There are so many potential tourist sites in the region which need to be developed for improvement of revenue mobilisation,” Mrs Owusu-Banahene stated.

During the interaction, issues concerning improvement of sanitation, security, education, health and roads were discussed, and the minister solicited support from the media to assist her to achieve her goals.

The media practitioners urged the minister to work hard to complete all projects started by her predecessors.

They also called for a lasting solution to issues of sanitation, health, security and education, among other challenges confronting the region.

They advised the minister not to surround herself with people whose attitudes and actions could cause discrimination and disunity among the people in the region.

Responding to the issues, Mrs Owusu-Banahene acknowledged that the support of everybody was needed for the achievement of the development aspirations of the region.

She promised to welcome suggestions, ideas and views from the public that were geared towards the development of the region.

“My doors are always open to all stakeholders who have the development of the region at heart, and I encourage the public to support me with ideas for the progress of the region,” Mrs Owusu-Banahene stated.

She appealed to journalists to use their various platforms to educate residents to take care of all government properties.