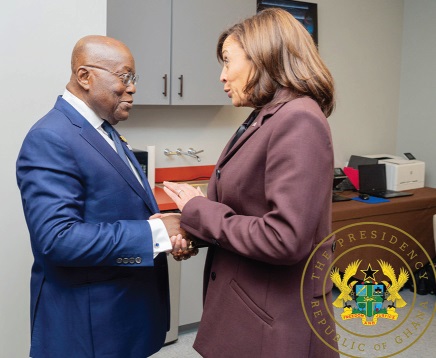 President Nana Addo Dankwa Akufo-Addo has urged the Africans in the diaspora to help make their countries of origin and the continent places of opportunities.

The President said they should portray the positive sides of the continent to make it attractive for both diasporans and the global investment community as a place of possibilities.

Addressing the Young African and Diasporan Leaders’ Summit on the sidelines of the US-Africa Leaders’ Summit in Washington D.C. USA last Tuesday, President Akufo-Addo noted that it was high time the African diaspora helped change the African narrative, which had been characterised largely by a concentration on disease, hunger, poverty and illegal mass migration.

The US-Africa Leaders’ Summit, which has attracted dozens of African leaders, is at the instance of the US President, Joe Biden, and is aimed at boosting cooperation with African nations.

The three-day summit will focus on key challenges, including the climate crisis, good governance, food security and global health, as well as bolstering US-Africa trade and investment opportunities centred around the non-reciprocal trade policy, the Africa Growth and Opportunity Act (AGOA).

Addressing the Young African and Diasporan Leaders’ Summit, President Akufo-Addo indicated that history was replete with several examples of the positive impact of diasporan communities on the growth and development of countries through increased trade activities, rising investments,and the transfer of skills and knowledge.

Citing the Chinese example which has an émigré population of 60 million, he said the Chinese diaspora is said to be the 25th largest country in the world, who according to the Nikkei Asian Review, owned assets worth $2.5 trillion.

“When foreign companies, in the late 1970s, reduced their investments in China, it was the Chinese Diaspora that shored up the economy,” he said.

President Akufo-Addo cited the Washington D.C-based Migration Policy Institute (MPI) report which stated that half of the foreign direct investments of $26 billion that transformed China into a manufacturing powerhouse in the 1990s, originated from the Chinese diaspora.

He said that was the rationale behind Ghana’s initiative of “Beyond the Return” to build on the considerable success of the “Year of Return”, and the renewed enthusiasm around building Africa together.

“Let us all remember that the destiny of all black people, no matter where they are in the world, is bound up with Africa.

“We should never forget that famous admonition of the celebrated Jamaican reggae star, Peter Tosh, when he said: ‘Don't care where you come from. As long as you're a black man, you're an African”, President Akufo-Addo cited.

The President also stressed the need to help make Africa the place for investment, progress and prosperity, and not from where the youth fled in the hope of accessing the mirage of a better life in Europe, Asia or the Americas.

President Akufo-Addo indicated that was what “Beyond the Return” sought to do, adding that “so we can derive maximum dividends from our relations with the diaspora in mutually beneficial co-operation, and as partners for shared growth and development.”

He noted the second half of the 20th century witnessed a great blow for human freedom and progress, when the African peoples, in the wake of Ghana’s shining example, liberated themselves from the colonial and imperialist yoke and the racist ideology of apartheid.

President Akufo-Addo said he was confident that the first half of the 21st century would consolidate that development and witness the growth of modern, prosperous, technologically advanced nations, within a united Africa, which would make a reality of the dream of the 21st century as the African century, and bring dignity and respect to black people all over the world.

“We have done enough talking, and, dare I say, we have had enough conferences and workshops. We know what we need to do. It is time just to do it. We have run out of excuses for the state of our continent. We have the manpower, we should have the political will, it is time to make Africa work,” the President added.