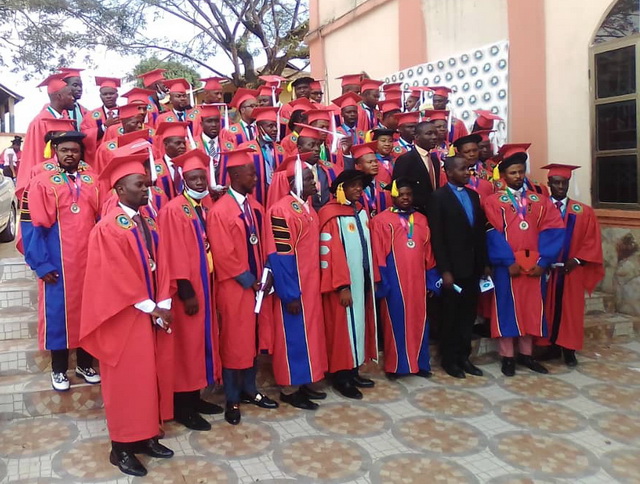 Some graduates in a group photograph after the graduation.
30.5k Shares

A lecturer at the University of Cape Coast (UCC), Dr Senyo Adzei has urged pastors and persons holding revered positions in churches to lead congregants by example in order not to sway followers into contrary missions.

He called on congregants to also be watchful and act based on the ‘Holy Scriptures’ rather than following men who walk contrary to the word of God.

He said it was not enough for one to proclaim Christ but more importantly to take a principled position against evil in all forms and manifestations.

Dr Adzei made the call at the 15th graduation ceremony of the Transforming Lives Theological University at Nkawkaw on Saturday, December 12, 2020, for 50 pastors who underwent 3-year diploma and degree programmes.

It was under the theme, “Pace Setters”

Christian Values
Dr Adzei called on the graduates to let the world see a change in them to rekindle a new hope in their followers.

He urged them also to reflect only the values defined by the Bible.

"The aggression, pay-him back attitude, cheating and pride must give way to sobriety, spirit of forgiveness, honesty and humility. It is when people see and appreciate these distinctive and admirable qualities in you that we could positively influence changes in society", he said.

Dr. Adzei added that "When truthfulness, unity, respectfulness, integrity, hard work and respect for the rule of law, which Christ extolled in his teachings are reflected in the daily lives of Christians, Ghana’s success would be a model for other developing countries."

Misplaced priorities
The Principal of the Transforming Lives Theological University, Dr Vicking Dzakar lamented the difficult times the world has experienced and attributed them misplaced priorities in leadership.

"Some of the hardships and difficulties the world was facing today could be attributed to misplaced priorities by leadership. Leadership that was not grounded in the fear of God, leadership that had alienated itself from Christian principles and indeed leadership that lacked moral values", he said.

He reminded the graduates that the secret to greatness and happiness was found and grounded only in Jesus Christ, and urged them to turn a new leaf.

Rev. Ebenezer Donkor, the second minister of Ebenezer Methodist Church, Nkawkaw, who chaired the function commended the founders of the school for their foresight.

He tasked the graduates to assume responsibility as preachers of the gospel with good virtues for the youth to imbibe the virtues of “truth, discipline, faithfulness, moral uprightness, and experience God to serve him truthfully".