Some of the buildings ravaged by the tidal waves Follow @Graphicgh

The National Disaster Management Organisation (NADMO) on Monday, March 4 2022, dispatched relief items and rescue boats from Accra to Agavedzi and Salakope in the Ketu South Municipality in the Volta Region to aid victims of the latest tidal waves.

In yet another spillage by the sea, 85 houses were flooded in the early hours of yesterday, with more than 300 people displaced in the two towns.

Speaking with the Daily Graphic yesterday, the Director General of NADMO, Eric Nana Agyemang Prempeh, said: “I am moving there with rescuers and rescue boats, as well as relief items, to support the victims.”

The Ketu Municipal Coordinator of NADMO, Torgbi Alossode Eve Agadzi II, who had visited the area earlier, said life was returning to normal after the waves had hit the two areas.

He said the sea had started receding and some of the people were returning to their homes, adding that “Agavedzi and Salakope are drying again”.

According to him, the tidal waves hit the area at about 4:30 a.m.

“We are still assessing the situation. This time, the tidal waves did not affect other communities in the area,” Torgbi Agadzi explained.

Some of the displaced people who had nowhere to turn to for relief were seen squatting beside coconut trees, while some children avoided school because the sea sometimes overrun the school compounds. 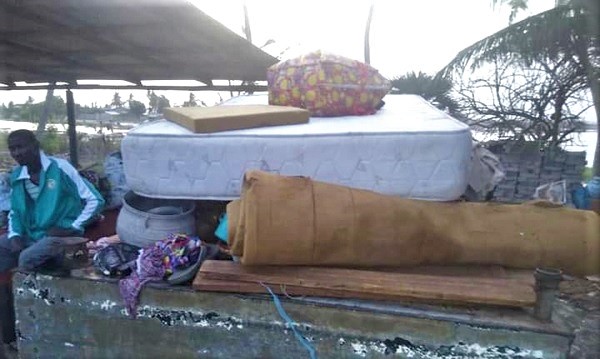 Some personal belongings retrieved after the tidal waves

Almost all the trees in the centuries-old revered forest at Agavedzi, known as Srive, were uprooted and carried away by the sea.

The Volta Regional Minister, Dr Archibald Yao Letsa, told the Daily Graphic that he was in Accra yesterday with the Ketu South Municipal Chief Executive, Maxwell Lugudor, holding talks with high-level government officials to seek appropriate interventions in the situation and also discuss the issue of resettling the victims on higher ground.

Although there had been promises to construct the Agavedzi sea defence project, it was nowhere near starting.

The sea has, since April last year, destroyed many houses and displaced more than 1,000 people in the municipality.

It also carried away more than 100 graves from the local cemetery at Agavedzi and claimed vast farmlands, depriving the people of their livelihood.

Last year, the sea nearly ran over the Aflao-Keta road, threatening to cut off Agavedzi, Amutinu and Salakope from the rest of the municipality.

Some residents exhumed the bodies of their dead relatives from the few remaining graves in their homes for reburial on higher ground.

Last year, the government pledged to commit at least GH¢10 million to feasibility and engineering studies to find a permanent solution to tidal waves in the country.

According to the government, it wanted a holistic approach to coastal erosion.

Speaking at a media briefing in Accra on December 6, 2021, the Minister of Finance, Ken Ofori-Atta, said: “In respect of the unfortunate tidal waves which rendered about 3,000 people homeless in the Keta, Ketu South and Anloga constituencies, we shall make the necessary budgetary allocation of at least GH¢10 million to complete feasibility and engineering studies for the coastline.”

“We will broaden the scope of the studies to consider a more comprehensive solution to protect Ghana’s 540 kilometres of coastline, including the 149 kilometres between Aflao and Prampram,” he added.

When the Daily Graphic enquired from Dr Letsa how far that promise had been carried through, he said: “We believe it will definitely be done.”