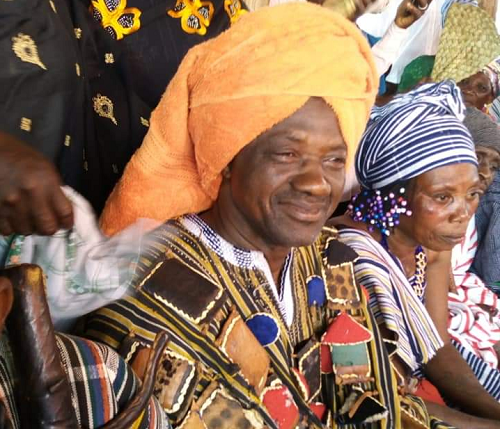 The Regent of Langbinsi in the North East Region, Naba Andrews Basigi has expressed concern over the increasing armed robbery and other criminal activities in the area.

According to him, the increasing spate of armed robbery and crime in the area has led to the loss of lives, while others have sustained life threatening injuries.

He lamented that the increasing criminal activities in the area was having a toll on the residents because it has created fear and panic among them, particularly traders and road users.

“In fact there is insecurity in the town and everybody is living in fear. Armed robbers always attack and rob people of their valuables; some people have even lost their lives through robbery attacks,” he stated.

He has therefore called on the police to intensify security in the area to help curb crimes and ensure the safety of the residents.

Naba Basigi made the call in an interview with Graphic Online on the back of a recent robbery incident where five persons were arrested by the police for allegedly robbing a businessman at Boku, a community near Langbinsi of an amount of Gh¢ 26,660.

The suspects, including three men and two women, have since been charged and remanded into prison custody in Gambaga.

Robbery attacks in the town and its surrounding communities have been on the rise in recent times. The area has recorded more than five robbery cases in a month.

According to him, the suspected robbers who are mostly indigenes are often apprehended and later set free without any prosecution which is resulting in the growing menace.

“Most of the suspects are indigenes of the town; they always arrest them, put them in custody and the next moment, we see them roaming in town without any prosecution because of some supposed interference.

They always come back to the town and threaten people who release information for their arrest and this is putting their lives in danger", he said.

He called on the police to step up efforts to ensure that the suspects who were arrested in connection with the recent incident are prosecuted to serve as deterrent to others.

The Regent also called on traditional authorities and various stakeholders to add their voices to draw the government’s attention to the growing menace which was creating insecurity in the area.