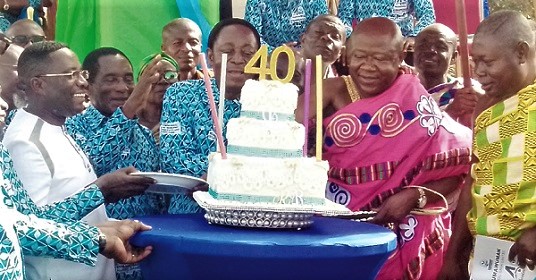 Dr Kwabena Duffour (3rd from left), first Board Chairman of the bank, and Barima Sarfo Tweneboa Kodua (2nd from right), the Paramount Chief of Kumawu, being assisted to cut the anniversary cake
30.5k Shares

Kumawuman Rural Bank in the Sekyere Kumawu District in the Ashanti Region has celebrated its 40 years anniversary, with a call on the directors of the bank to carve a new strategy for further development of the bank.

The Chief of Kumawu, Barima Sarfo Tweneboah Kodua, who made the call, urged the directors to work hard and remain dedicated to grow the bank.

He also advised them to pay attention to the grievances of shareholders and to address them accordingly.

Barima Kodua, however, expressed appreciation to the founding members of the bank, the board, shareholders and other dignitaries for their expert advice, assuring them that their admonitions would help to further develop the bank.

The first board chairman of the bank, Dr Kwabena Duffour, urged managers of the bank to put forward a new strategy to enable the bank to develop further.


He expressed appreciation for the opening of a new Kumawuman Rural Bank branch in Drobonso, adding that it had huge investment opportunities.

Established on October 29,1982, with a deposit of Gh¢60, the Kumawuman Rural Bank was spearheaded by a group of people called "Kumawu Biako Ye Kuo" in Accra, who conceived the idea in 1980 to set up a bank to meet the socio-economic needs of the people in and around Kumawu.

In 1982, the dream of setting up the bank materialised.

It began operations with four staff which has increased to the current 307 staff, with 13 branches and a customer base of over 165,000.

It also has a deposit of nealy GH¢148 million.