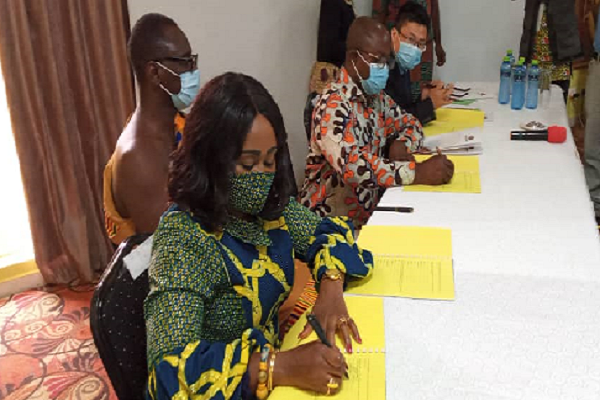 The Ministry of Tourism, Arts and Culture has signed a memorandum of understanding (MoU) with China Bengbu International Technology and Economic Cooperation Limited (CBITEC), a technical conglomerate that specialises in international design, construction, and management of projects, for the construction of a modern theatre in Kumasi.

The MoU was signed in Kumasi on Saturday, September 5, 2020.

The sector Minister, Mrs. Barbara Oteng-Gyasi, signed for the ministry, while Mr. Li Zhongchun, the business executive of CBITEC, signed for the company, with the Metropolitan Chief Executive (MCE) for Kumasi, Mr. Osei Assibey Antwi, serving as witness.

Designed for large conferences, drama and music performances, and modern dance, the theatre will seat 2,000 people in the main auditorium and also contain a 600-capacity hall for conferences and meetings.

The Asantehene, Otumfuo Osei Tutu II, has provided a parcel of land for the project.

Mrs. Oteng-Gyasi said the theatre, when completed, would not only add to the beauty of the architectural skyline in Kumasi but also inject new energy into the arts and culture space in the metropolis.

She said it would also increase business and events in tourism, create jobs, as well as have a spillover effect on the ancillary arts and culture sector in the region.

She said the project was expected to commence next year, after preparation works had been done.

According to her, the 2020 Global Peace Index Report ranked Ghana as the most peaceful country in West Africa and the third most peaceful on the continent, adding: "This enviable position has great marketing potential for the creative arts sector.”

Mrs. Oteng-Gyasi said a thriving creative arts industry in Africa could trigger the potential growth of players in the sector, such as artists, entrepreneurs, distributors, and support services for accelerated growth.

She said the government was exploring comparative advantages and potential in the various regions to see how culture and arts could drive the local economy for development.

For instance, she mentioned the Kente weaving industry in Bonwire, Ntonso, and Adanwomase as places that could be offered the necessary support for job creation, adding that the sod would soon be cut for expansion works in those areas.

The minister commended the Kumawood movie industry for its contribution to the film industry, which she said was also a tool that could be harnessed to revolutionise the creative arts and culture industry.

She said the Creative Arts Bill, when passed into law, would also help put the Ghana movie industry on the global map like Nollywood, Bollywood, and Hollywood.

Mr. Osei Assibey expressed appreciation to the Asantehene for providing land for the project.

He also thanked the ministry for selecting Kumasi for the project and gave an assurance that the KMA would offer the necessary support for the execution of the project.

He said plans were underway for the construction of a cultural museum in Kumasi by the assembly, saying the architectural designs and a concept paper had already been prepared.

The Apagyahene of Kumasi, Nana Owusu Afiyie IV, who represented the Asantehene, also lauded the government for the decision to construct a theatre in Kumasi.