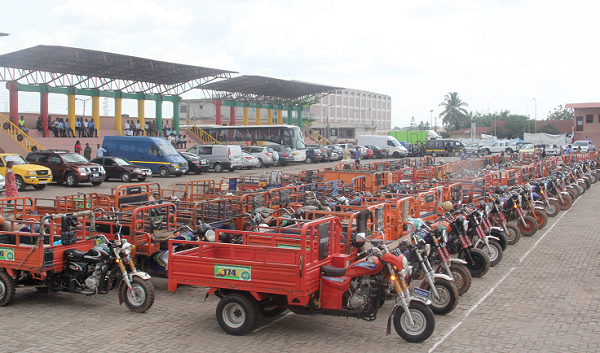 The Kumasi Metropolitan Assembly (KMA) has adopted citizen participation and inclusion as an essential component to tackle the sanitation challenge.

In recent times, the general poor sanitation in the country has become a major topic for public discussion with President Nana Addo Dankwa Akufo-Addo rallying Ghanaians to battle the scourge.

Determined not to be left behind, the KMA has, over the past year, taken steps to increase the awareness levels of the people on environmental risks associated with poor sanitation and the results have started showing as the city makes positive strides in the war against poor sanitation.

Founded in 1680, Kumasi has grown into a boisterous city with the population reaching 2.6 million in 2016.
The growing population, the negative attitudes of people to sanitation and waste management, and the inaction of the city authorities in the past compounded the sanitation situation.

But determined to tackle the menace of increasing waste, the KMA has this time moved away from the old ways of doing things and adopted a more holistic approach, with attitudinal change in the heart of the strategy.

Sanitation is essential to human progress and serves as a measurement pole for growth.

The World Health Organisation (WHO) estimates that, on the average, every $1 invested in sanitation results in $5.50 in economic returns.

Aware of the consequences that accompany poor sanitation, the KMA has been proactive this time.

In arguably one of the biggest efforts ever in the environmental sanitation drive in Kumasi, the assembly is mobilising all human, material and financial resources to stop the rot.

“We have a task to perform and we are going about it with innovative measures,” the Metropolitan Chief Executive, Mr Osei Assibey Antwi, said.

On the assumption of office of the current metroplitan chief executive, the filth levels in Kumasi were very high with piles of refuse consuming the various sanitary sites. Consequently, the immediate evacuation of refuse came on the cards of the assembly to restore sanity.

Today the situation has improved tremendously, although there is still some amount of work to be done.

A number of public cleaning campaigns organised in the metropolis over the period received impressive participation with some non-governmental organisations, including the Aliu Mahama Foundation, joining in the exercise.

The KMA’s decision to involve strategic partners in its sanitation activities has led to the Ghana National Fire Service (GNFS), the National Commission for Civic Education (NCCE), the Information Services Department (ISD) and the media playing various roles.

While the GNFS use their equipment to clear choked drains, the NCCE, ISD and the media have been playing key roles in education.

In a bid to improve awareness creation, the KMA has trained 150 national service personnel as sanitation crusaders.

They have been placed under the Environmental Health and Community Development of the assembly and ably assisted by the Waste Management Directorate to embark on intensive education on sanitation. “The feedback we are getting from their activities is good,” Mr Antwi said.

A night cleaning exercise concentrated in the central business district (CBD) had added to the strides made in the sanitation campaign.

Starting about 8 p.m., sometimes with the involvement of the chief executive, the cleaning continues until all the rubbish in the CBD is completely cleared.

Another unique move to fighting poor sanitation is the branding of tricycles which was launched by the Minister of Sanitation and Water Resources, Mr Kofi Adda, last Tuesday in Kumasi.

The branding is to regulate the activities of tricycles popularly known as “aboboyaa” which are used in carting refuse in the metropolis.

The KMA is the first assembly in the country to come up with such initiative and in the words of the minister, “ This has really proved that Ghana is working here (Kumasi)”

The KMA has registered all the tricycles and branded them in the orange colour with special identification numbers and tags. This differentiates them from the tricycles used in carting food items.

Kumasi has lost much of its accolade as the Garden City. A greater amount of the greenery that uniquely characterised the traditional city has been lost mostly through human activities but the KMA is bent on restoring the once enviable image.

Consequently, the assembly has established a strong partnership with institutions including the Forest Research Institute of Ghana (FORIG), the Forestry Commission and the Kwame Nkrumah University of Science and Technology (KNUST) to pursue a tree-planting programme.

Five sub-metros, made up of Subin, Asokwa, Manhyia, Nhyiaeso and Bantama, have so far taken part in the tree planting exercise.

Religious institutions are also being encouraged to take part in the greening exercise and some have responded positively.

So far about 10,000 tree seedlings of various species have been planted and are being nurtured to maturity.
The greening programme has received support from some financial institutions.

The National Investment Bank (NIB) presented a cheque for GH¢66,950 which went to the KNUST for the planting of trees in the median of major streets in the city.

The Royal Bank also joined the fray with the provision of 5,000 seedlings, while the Fidelity Bank has agreed to supply litter bins for the sanitation programme.

Enforcement of sanitation bye laws is rigorously being pursued. During the latter part of 2017, 11 persons were arrested for various sanitation offences and jailed one month each by a court to undertake community work.

In addition to that, the formation of the Sanitation Brigade is complementing the enforcement programme. They move round to apprehend people who litter the streets to face prosecution.

As the KMA warms itself into the future with hope, the Mayor said “significantly, the people are buying into our activities and very soon we will move into another gear with the launch of the Operation Keep Kumasi Clean programme.”