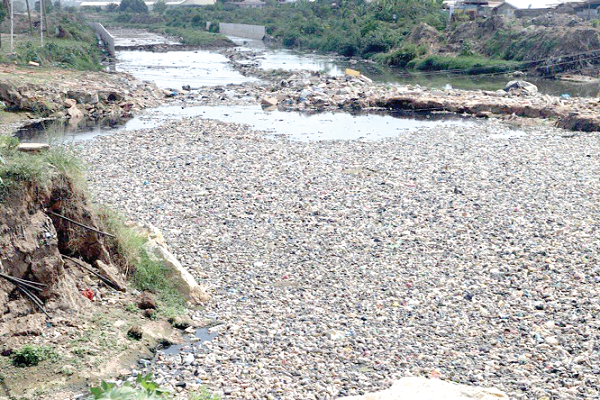 The drainage at Atonsu where the Sesan River takes its course has been heavily polluted by plastic waste
30.5k Shares

In spite of efforts by city authorities to control the indiscriminate disposal of waste in the metropolis, the Ashanti Regional capital, Kumasi, is still reeling from the menace of waste.

Sanitation continues to be the major bill on most assemblies’ budget in the various district, municipal and metropolitan assemblies in the country and Kumasi is no exception.

The assembly spends close to half a million cedis on a monthly basis in managing waste and other sanitation-related matters.

As part of measures to manage the indiscriminate waste disposal in the metropolis, the assembly in 2017 launched a programme dubbed Keep Kumasi Green and Clean (KKGC) campaign, where the assembly installed waste bins at various locations within the city to enable patrons to dispose of their waste conveniently.

The excuse in the past had been that the streets lacked dust and waste bins and as such, people were compelled to throw away their litter on the streets.

Therefore, with the launch of the KKGC campaign which saw the installation of 500 waste bins in the metropolis, one would have thought that the issue of indiscriminate waste disposal would have been a thing of the past.

The practice seems to remain the same as the streets are still littered with waste, particularly plastic waste.

That notwithstanding, the Public Relations Officer of the Kumasi Metropolitan Assembly (KMA), Ms Henrietta Afia Konadu Aboagye, believed that the campaign had had some significant impact, particularly in restoring the city's lost glory as the Garden City of West Africa.

She said as part of the campaign, aside from ensuring a clean environment, the project also saw the planting of 72,399 species of different trees throughout the metropolis.

She said the trees were not only to provide aesthetic beauty to the city but also to serve as vegetation cover and protect the wetlands from encroachment.

She said through the project, the assembly also managed to get the Judicial Service to set up a court solely dedicated to sanitation issues.

According to her, at the end of last year, 141 sanitation offenders were processed for court, out of which 78 were convicted and fined various sums of money.

Twenty-four of such cases were still pending before the court while four had been struck out and eight withdrawn, she said.

Another success of the campaign, according to Ms Aboagye, was the introduction of the Name and Shame initiative. She said the assembly, in partnership with the Multimedia Group, monitored households and businesses that were not keeping their surroundings clean, published their stories and also got them arrested and prosecuted.

Notwithstanding the effort of the assembly to keep the city clean, there are still some challenges.

The indiscriminate disposal of waste seems to be on the ascendancy. People still litter, and where the bins have been provided, they are not emptied on time, leading to a spillover of the waste in and around the bins.

Household waste also find their way into the bins provided on the streets as those unwilling to pay for the disposal of waste dump their waste there under the cover of darkness.

According to Ms Aboagye, the central business district (CBD) alone generated 200 tonnes of waste on a daily basis and it cost the assembly about GH¢50 to clear one tonne of waste.

“We spend about GH¢420,000 every month just to clear the waste generated in the metropolis, and this money could have been channelled into other developmental activities if people were to properly dispose of their waste,” she said.

She explained that most of the store owners in the CBD left their waste in front of the shops every evening when they closed, “with the excuse that they pay tax so the state must clear the waste”.

The resultant effects of the indiscriminate and improper waste disposal rear their ugly heads whenever it rains.

Most of the drains have been choked with plastic waste, preventing the rain water from flowing easily through the drains.

All the water bodies in the metropolis have been inundated with bottles, plastic bags and water sachets.

As part of the measures to curb the menace of plastic waste in the system, the Assembly Member for the Asafo Electoral Area, Mr Ernest Okai, has partnered with a non-governmental organisation that is into recycling to build a plastic collection centre at Asafo.

The organisation also encourages pickers of plastics to drop their waste there at a fee.

Mr Okai said the main challenge was the inadequate dumping sites in their area.

According to him, if the waste cars or tricycles did not go to the homes to collect the waste, the people found alternative means to dispose of their waste, which unfortunately ended up in the drains most of the time.