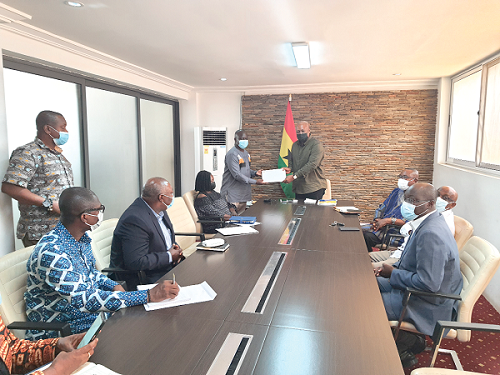 President Nana Addo Dankwa Akufo-Addo and former Presidents John Agyekum Kufuor and John Dramani Mahama have pledged their support for the successful conduct of the 2021 Population and Housing Census (PHC).

They described the exercise as a timely activity to help the country have actual data on its population and housing situation.

The pledges were contained in a release issued in Accra yesterday by the Office of the Government Statistician, Professor Samuel Kobina Annim.

According to the release, a delegation from the Ghana Statistical Service (GSS) paid courtesy calls on former Presidents Mahama and Kufuor last Tuesday and yesterday, respectively.

The visits were subsequent to a briefing session with President Akufo-Addo on the status of the upcoming PHC on April 7, this year.

Following the briefing, the release said, President Akufo-Addo “affirmed his unflinching support for the decennial non-political partisan national programme and indicated his availability to launch the 30-day countdown to the Census Night on May 28, 2021”.

It said “consequent to this, a delegation, comprising the Government Statistician (Chief Census Officer), members of the Board of the GSS and the Census Coordinating and Management Team visited both former Presidents”.

The release said the purpose was to elicit their support for census publicity, education and advocacy (PEA) activities.

The slogan for the 2021 PHC is: “You count, get counted”, and the release explained that “this is because the 2021 PHC aims at comprehensive and complete coverage, so that no one is left behind. Data from the census will be used for decision-making, policy and planning for the development of the nation and its residents”.

It further indicated that the census was a priority development, non-partisan programme that required the participation of all Ghanaians.

“To that end, as part of the census PEA strategy, the GSS is enlisting the support of statesmen, political and religious leaders to advocate the census to ensure that all people are told why it is being conducted, the benefits and why they need to be counted,” it said.

Former President Mahama, the release said, thanked the delegation for demonstrating that the census was a non-partisan activity.

It said he pledged to lend his support to the important exercise, describing the census as timely because it would allow the country to have updated data, instead of relying on projections.

The use of data enabled targeted interventions, such as poverty reduction and decisions on where to site public services, such as hospitals and schools, he said.

Mr Mahama also acknowledged the fact that it was a positive step for the country to conduct a digital census because it would get speedy results.

Subsequently, according to the release, the former President pledged to lend his voice to publicise the census in a non-partisan manner and encouraged everyone to ensure that he or she was counted.

Present during the courtesy call on former President Mahama were the Chairman of the National Democratic Congress (NDC), Mr Samuel Ofosu-Ampofo; the running mate to the NDC presidential candidate in the 2020 elections, Prof. Jane Naana Opoku-Agyemang, and a former Finance Minister, Mr Seth Terkper.

Both Prof. Opoku-Agyemang and Mr Terkper reiterated the importance of the census and stressed the need to depoliticise the process.

Mr Kufuor, the release said, described the census as a national activity to “generate data to be used as the basis for our development and determine how national resources should be allocated”.

He agreed with the fact that the census was not a political activity because it helped the nation to plan for all category of persons.

Mr Kufuor said the engagement of the Chief Census Officer with statesmen and other leaders should confirm that the census was inclusive and non-partisan, and that all must endeavour to be counted.

The former President noted that the tendency to politicise activities that did not need political undertones undermined progress.

He said such actions remained a hindrance to the completion and success of development initiatives meant to benefit the general populace.

The former President urged the GSS to conduct the census properly and in an inclusive manner to ensure that the exercise remained free from politics.