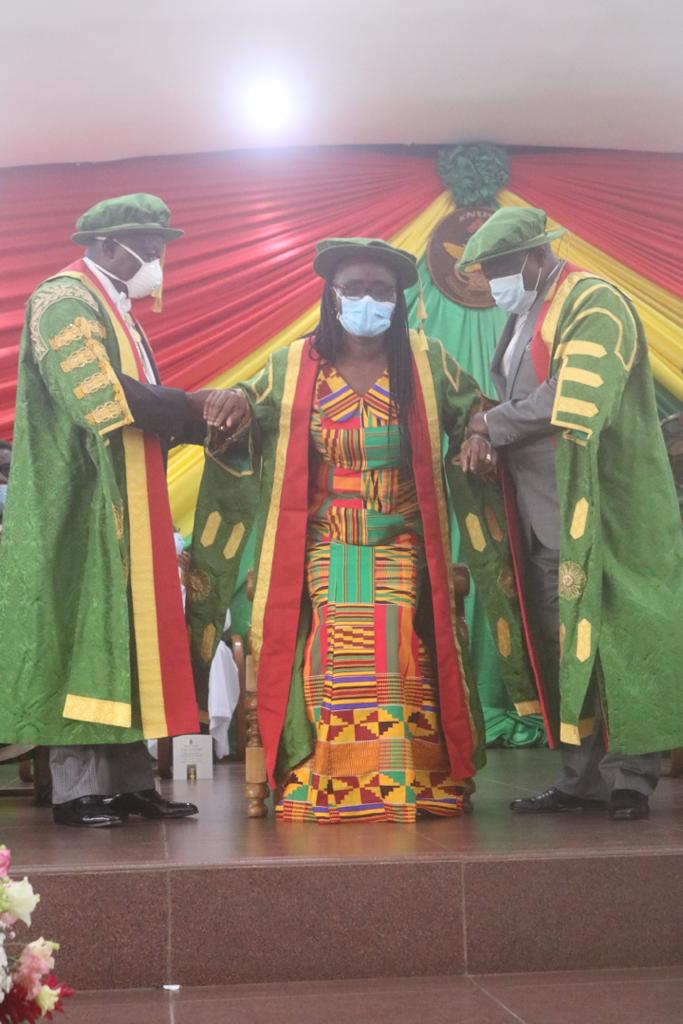 The first female Vice-Chancellor of the Kwame Nkrumah University of Science and Technology (KNUST), Proferssor Mrs Rita Akosua Dickson was on Saturday sworn into office.

She takes over from Professor Kwasi Obiri Danso whose tenure in office came to an end on Friday, July 31, 2020.

Professor Akosua Dickson becomes the 11th Vice-Chancellor of the KNUST, which was established 69-years ago.

She is a professor in pharmacy.

In her inaugural address she said one of her key vision will be to roll out a special initiative dubbed: "Support one needy student with one laptop" to help poor students who may be unable to acquire a laptop for online studies.

Prof Dickson promised to position KNUST in the global community by promoting research and helping Industry to grow.

She also promised to champion entrepreneurship and critical thinking through evidence based teaching and learning.

Prof. Akosua Dickson said digital and e-education would be key in sustaining education all year round and to create a young research forum for the university.

She called for decency, respect and decorum in the working environment and "all hands on deck."

She studied at the KNUST and graduated with a Bachelor of pharmacy in 1994. She undertook her national service at the Department of Pharmacy and also had her internship at the Komfo Anokye Teaching Hospital (KATH).

Prof. Dickson obtained her Masters in Pharmacy in 1999 and was appointed a lecturer in 2000 at the KNUST.

She won a Commonwealth scholarship in 2003 to pursue her PhD at the King's College London, University of London, UK.

After obtaining her PhD, she also acquired a certificate in academic practice from the same university.

Prof. Dickson returned to Ghana in 2007 and was promoted to the position of a senior lecturer in 2009 and subsequently became an associate professor in 2014.