Mr Gary Nimako Marfo, counsel for Nii Armah Ashietey, the Member of Parliament for Klottey Korle who is challenging the eligibility of Dr Zanetor Agyeman-Rawlings as Parliamentary nominee for the National Democratic Congress (NDC) stated Thursday that he was being trailed by some unknown persons.

In a letter to the Registrar of the Accra High Court, Mr Nimako Marfo said he was trailed by unknown persons when driving home after work.

He said the unknown persons immediately drove off when he parked at North Legon Police Post to alert the police.

Mr Marfo said a report has already been lodged with the police to that effect and that he was in the process of arranging for personal security to protect himself, his family and office staff.

“In view of the aforesaid, Counsel prays that the matter be adjourned to Tuesday 9th March, 2016 subject to the overriding convenience of this Honourable court to enable the security arrangements to be concluded before proceeding with the the suit."

Nii Armah Ashietey is challenging Zanetor Agyeman-Rawlings in court after she defeated him in the ruling NDC’s parliamentary primary held in November 2015.

He is claiming that Dr Agyeman-Rawlings was not a registered voter and was therefore not qualified to contest as MP.

The case was scheduled for hearing on Thursday March 3 but Graphic Online's reporter, Seth J. Bokpe reported that when it was called the court adjourned to March 9.

The court said it had received a letter from Mr Marfo but did not disclose the contents. 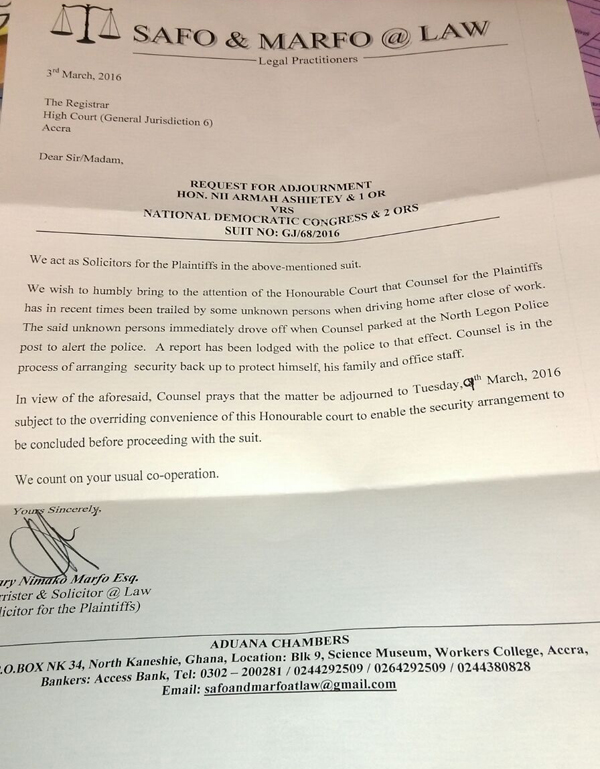