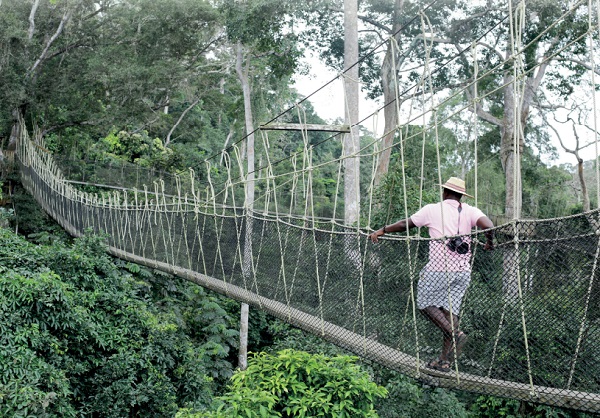 Kakum National Park, arguably Ghana’s most visited natural attraction, is located at Kakum in the Central Region of Ghana. It is about 33 kilometres from Cape Coast, the capital of the regional capital. The national park encompasses an area of 145 square miles (375 sq km). It was named after the Kakum River which begins from the inside of the protected park.

The Kakum Park was established in 1931 and received acknowledgement as a National Park in 1992.

In March 1995, Kakum National Park became home to the only canopy walkway on the Africa continent. The walkway provides both tourists and researchers privileged access to the rainforest’s canopy. The 350 metre long bridge connects seven tree tops; it is constructed of wire rope, aluminium ladders, wooden planks and safety netting. In order to protect the trees, no nails or bolts pierce the bark.

Up in the canopy one may see species of birds and insects that are almost impossible to find on the ground level. The canopy walkway is a joint effort between Ghana’s Wildlife Department and Conservation International, a US-based international non governmental (NGO) organisation dedicated to conserving ecosystems and biodiversity, with funding from USAID.

Kakum National Park treasures many different plants and animal species and is very popular destination for the tourists, hikers, botanists and birdwatchers from all around the world.

The elevated canopy trail provides a bird’s-eye view and better chance to discover some of the wildlife below.

There are 266 species of birds within the park boundaries. It has the most populous collection of forest elephants within the country.

The Diana monkey, giant bongo antelope, yellow-backed duiker, and African elephant are all endangered species protected within the park.

The Kakum National Park was declared a UNESCO World Heritage Site in the year 2000.