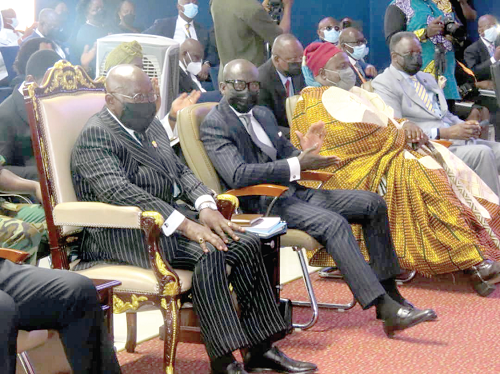 The Ministry of Justice has started the procurement of 89 vehicles for distribution to regional offices, agencies and departments under the ministry.

The purchase of the vehicles forms part of efforts to equip the ministry, and the Attorney-General’s Department and agencies to enable them to perform their mandate effectively.

The Attorney-General and Minister of Justice, Mr Godfred Yeboah Dame, who said this last Monday, said per the procurement schedule, the vehicles would be delivered within the next 12 weeks.

The Cabinet approved the procurement of the vehicles in June this year, paving the way for the Ministry of Finance to release funds for the purchase.

Mr Dame, who was addressing the 2021 Annual General Conference of the Ghana Bar Association (GBA) in Bolgatanga in the Upper East Region, said renovation works on a 12-storey office building for staff of the ministry were also progressing steadily and could be completed within the next 18 months.

The building is situated close to the Court Complex in Accra.

“A well-oiled A-G’s Department is the biggest signpost for improving conditions and the practice of law,” he said.

The minister deplored the attitude of some lawyers who “deploy both traditional and social media to assail the integrity and reputation of senior figures in the country”.

Such conduct, he said, was “undoubtedly dishonourable and a breach of professional conduct and etiquette at the Bar".

The Attorney-General, therefore, advised lawyers who were engaged in such practices to be mindful of the “age-old requirements of the profession in so far as ethics was concerned”, saying technology did not eradicate ethics, nor did it render the need for ethical compliance any less important or necessary.

Mr Dame further expressed concern about the spread of false information by lawyers and said such behaviour was in disregard for the cherished values of the law profession.

“Such behaviour, apart from being disreputable, poses a far greater threat to societal cohesion, especially when it comes from senior lawyers with a misguided crave for cheap publicity and undue disparagement of others which must be avoided," he said.

The minister said “ultimately, a silent Bar breeds a corrupt Bench and affects the corps of society we seek to build".

The Chief Justice, Justice Kwasi Anin Yeboah, said the Judiciary was collaborating with the GBA to put in place measures to decongest the courts and also increase access to justice.

He explained that the effect of having fewer number of courts was the time and money spent by litigants to travel long distances, which consequences included the long adjournment of cases, a situation that “should be a thing of the past”.

Justice Anin Yeboah, however, said the establishment of administrative tribunals could help decongest the courts.