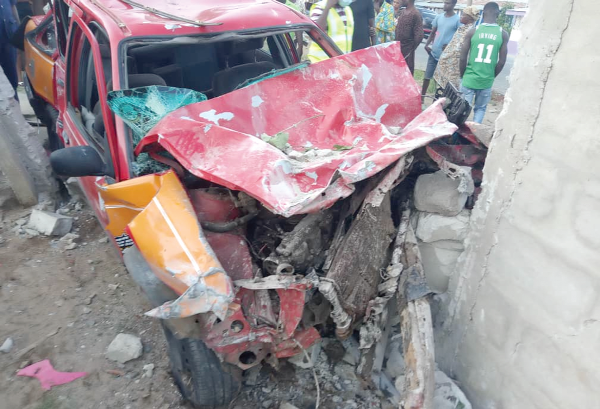 The taxi that killed five on the spot at Tegbi
30.5k Shares

The first move of celebration by a 30-year-old unemployed who won GH¢1200 lottery ended in the death of five people at Tegbi Vakpomda in the Anlo District of the Volta Region.

The tragedy that hit one family last Wednesday [July 1, 2020] has thrown the community into a state of mourning.

Over the years luck had been eluding Wisdom Kpodo anytime he staked lotto, but when luck shone on him eventually, his joy knew no bounds, and in an ecstatic mood, he jumped into a taxi, with registration number GT 4482 U, about 4:00pm, with two of his friends and drove recklessly thereby killing five on the spot.

According to the Assembly Member for Tegbi Afedome Electoral Area, Mr Noel Kokoroko, Wisdom moved the taxi from Woe near Tegbi, to Keta at top speed with others shouting "no size, no size”.

On his return to Woe, and on reaching Vakpomda, the eyewitness narrated, the driver attempted to overtake three vehicles in a row, and in the process lost control of the steering and veered into a house, which was 40 metres away from the road, ending the lives of the five persons.

Those who died instantly were Regina Edzia and her three children, while the other person was pronounced dead on arrival at the Keta Government Hospital.

The Keta Municipal Police, which confirmed the story, said the suspect was in police custody while investigations were underway into the incident.