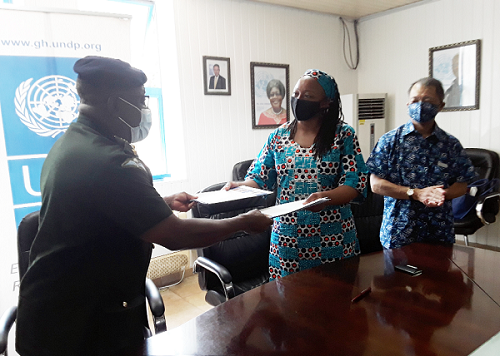 The Japanese government has provided support for a project that seeks to counter or even prevent terrorism in Ghana and four other West African countries.

The project, dubbed “Strengthening Response Capacities of State and Civil Society Actors in Preventing and Countering Terrorism and Violent Extremism in Coastal States in West Africa”, is being implemented by the United Nations Department of Political Affairs (UNDPA) and the Kofi Annan International Peacekeeping Training Centre (KAIPTC).

Apart from Ghana, other national and regional security and civil society organisations in Benin, Togo, Cote d’Ivoire and Burkina Faso will also benefit from the project.

Activities under the project will include workshops on preventing and countering terrorism and violent extremism in coastal states in West Africa for the five countries.

It is expected to increase the capacity of border agency personnel and civil society actors to prevent and counter violent extremism and terrorism.

The project is also expected to improve evidence-based community engagement and cross-country cooperation on prevention and countering terrorism and violent extremism.

An overview report on the project indicated that in recent times, terrorism and violent extremism had continued to gain momentum in Africa, particularly in the Sahel region, with regular attacks by militants and extremists on civilian and military populations.

It said the formation of the Jama’at Nusrat ul-Islam wal-Muslimeen (JNIM) in March 2017 changed the dynamics of violent extremism in the Sahel.

Also, the JNIM — having emerged from an alliance of Ansar Dine, the Macina Liberation Front, Al-Mourabitoun, and Al-Qaeda in the Islamic Maghreb (AQIM) — had rapidly expanded its activities from Mali to Niger, with the current geographic focus shifting to Burkina Faso and the coastal West African states.

He expressed the hope that the support from the people of Japan would help to address any form of terrorism and attacks along the coastal states in West Africa.

Dr Lusigi said most of the terrorism and violent attacks were as a result of poverty and unemployment, and that there was an urgent need to put in place measures to curb the menace.

The Commandant, KAIPTC, Brigadier General Francis Ofori, said more than 6,000 fatalities were recorded by the UN in 2020 in three Sahelian  countries — Mali, Niger and Burkina Faso.

"As recently as June 6, 2021, Burkina Faso witnessed one of the deadliest terrorist attacks in one of its northern villages where 160 civilians were killed," he said.

He said security was a fluid concept, and that there was the need to constantly ensure that the gaps created by insecurity were plugged.

"This means we must take a proactive rather than reactive approach in tackling insecurity, particularly in our troubled region," he said.