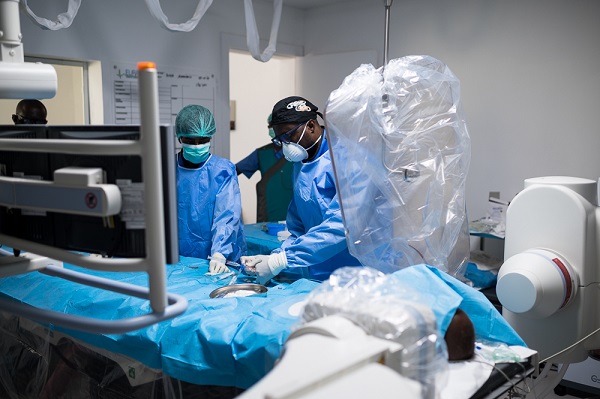 Ghana has achieved a milestone in child eye care with the successful use of Intra arterial chemotherapy (IAC) to treat Retinoblastoma (Rb), a type of eye cancer that affects children under six years.

IAC is a method of delivering concentrated doses of cancer-killing medicine (chemotherapy) directly to the affected area of the eye through the eye’s main blood supply.

A team of eight medical professionals achieved the feat at the Euracare Advanced Diagnostics and Heart Centre, a private hospital in Accra, using a multidisciplinary approach to treat a number of large cancers in the left eye of a 20-month-old female who had advanced and multiple cancers in the right and left eyes respectively.

Medical doctors said this was the first time an advanced form of eye cancer (retinoblastoma) in children was treated using IAC in Ghana and the entire West African sub-region.

The team which carried out the procedure comprised an interventional radiologist, paediatric ophthalmologists, a paediatric oncologist, a pharmacist and an anaesthetist and an ophthalmic technician.

The medical feat was realised through a collaboration between the University of Ghana Medical School (UGMS), the Korle Bu Teaching Hospital (KBTH) and the Euracare Advanced Diagnostics and Heart Centre, with the support for the training of the interventional radiologist for this treatment in India by the Himalayan Cataract Project, an International NGO supporting eyecare and training of various cadres of eye care workers to provide quality and specialized eye care in Ghana and other countries.

Speaking to the Daily Graphic at the Euracare Advanced Diagnostic Centre in Accra where the medical procedure was carried out yesterday (27th May, 2020), an Interventional Radiologist at UGMS, who also consults for Euracare, Dr Benjamin Sarkodie, explained that “this new treatment involves injecting small doses of cancer- killing drugs directly into the eye of a patient without cutting it open.”

"The eye receives blood supply from a serving vessel called ophthalmic artery, so what we do in IAC is to try and gain access to that artery so that we can inject the drugs directly into the eye,” he said.

He explained that as part of the procedure, there was a small incision on the groin where a very thin catheter and a guide wire (a fine, long, flexible tube or thread) was inserted into an artery in the groin and tracked through the body’s network of arteries in the abdomen and the chest into the neck to the opening of the ophthalmic artery, a tiny blood vessel behind the eye, where the cancer- killing drug was given directly into the eye without it being cut open.

Dr Sarkodie said once the drug was injected into the eye, it kills the cancer cells directly stopping the spread of the cancer to other parts of the body, thus, protecting the eye from damage and preserving vision where possible.

The advantage is that, eyes that would have been removed can now be saved if the cancer is moderately advance, and sometimes vision preserved.

He said the procedure, which was successfully carried out after two years of hard work, followed required protocols.

“There are protocols to follow because other countries who have done it say we can get maximum effect when we do two or three sessions. So for this child, we are doing the second session for her today after which we will decide whether to do a third one,” Dr Sarkodie added.

A Paediatric Opthalmologist at the UGMS and the KBTH, Dr Vera Adobea Essuman, who is the leader of this multi-disciplinary team, also said although the right eye of the child had to be taken out and replaced with artificial eye because the cancer was too advanced, the team was hopeful that the IAC would succeed in preserving the left eye as well as save the child's vision.

"The child was brought in with cancer in both eyes. The right eye was removed because the cancer was too advanced and could not be treated with other conservative forms of treatment. She also had multiple cancers in the left eye and that is what we are treating to save the eye and the vision so she does not go blind for life,” she said.

Dr Essuman said other methods of treating eye cancer in children, including laser which uses light energy and cryotherapy, which uses freezing method, could not be used to treat advanced forms of tumour (more than one centimetre).

She said other forms of treatment also available in Ghana are systemic chemotherapy and external beam radiation.

Dr Essuman advised parents to look out for early signs of eye cancer in their children so that appropriate treatment could be offered to save their sight and mentioned some of the signs of eye cancer in children to include eyes that looked slanted or squints, white and shiny spots, popularly called “cat eyes,” and protruding eyes.

Other members of the medical team were a Paediatric Ophthalmologist at KBTH, Dr Dziffa-Bella Ofori-Adjei; a Vitreo-retinal Surgeon, UGMS/KBTH; Dr Kwesi Amissah-Arthur, and the Head of the Paediatric Oncology Unit of KBTH, Professor Lorna Awo Renner.

The rest were an Anaesthetist at the KBTH, Dr Fred Osei; a Pharmacist at the Eye Department, KBTH, Mr Jatoe Dong, and an Ophthalmic Technician/ Principal Research Officer at the UGMS, Mr. Benjamin Abaidoo.