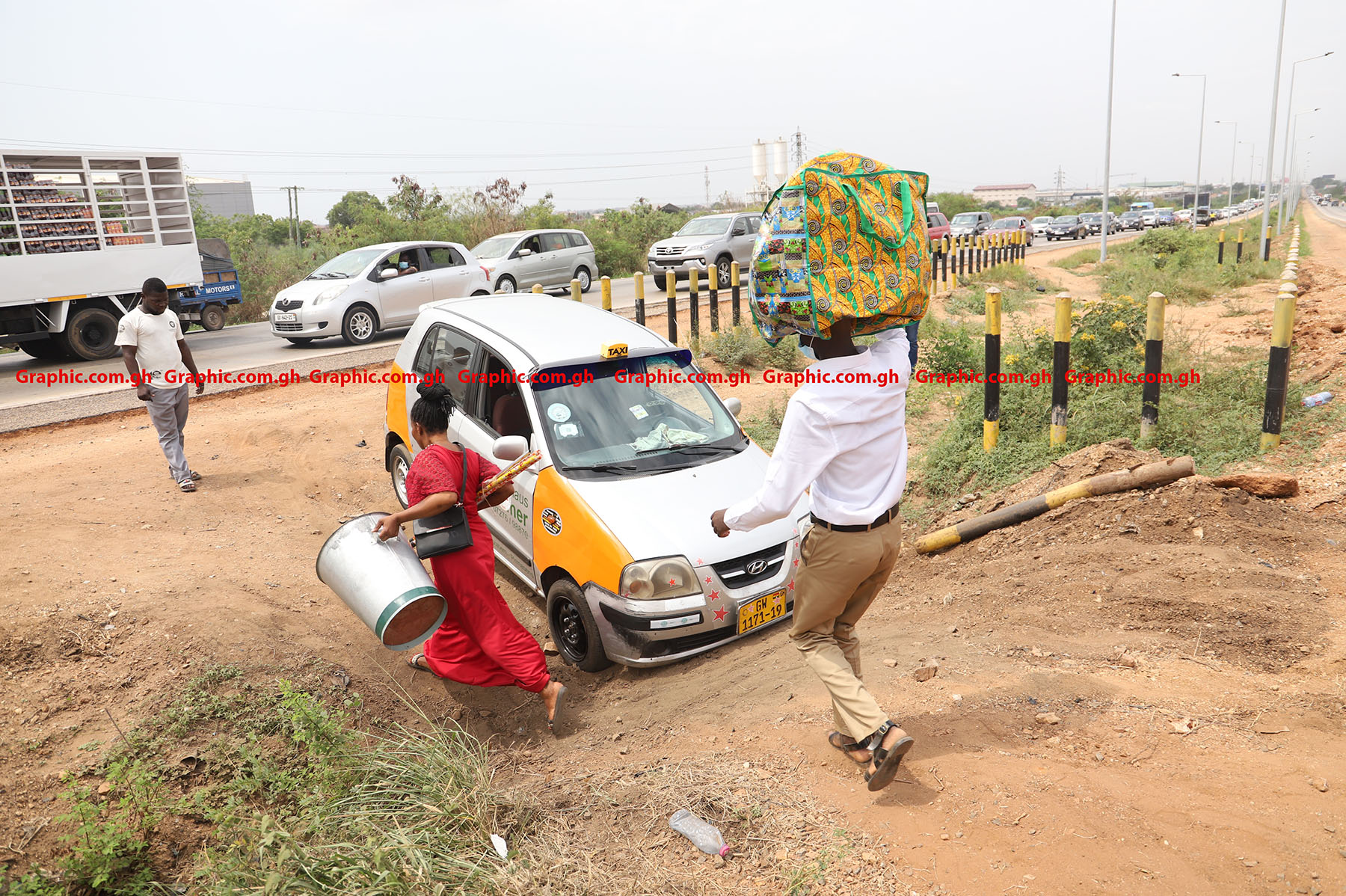 A taxi driver caught red handed after his car got trapped in the median of the road with other pedestrians crossing the road
30.5k Shares

There appears to be no end in sight for the indiscipline among many motorists on the Accra-Tema Motorway.

On the 19-km motorway on a daily basis, some motorists defy warnings to engage in activities that threaten lives and properties.

For three days (March 10 - 12, 2021) when the Daily Graphic monitored activities on the country’s only motorway as a follow-up to a similar exercise in December last year, it observed that the illegal activities along the route were still ongoing.

The indiscipline, in the form of road diversions, illegal U-turns, illegal bus stops, dumping of refuse, farming, dangerous driving, among others, was mainly perpetrated by drivers, slum dwellers, tricycle riders and farmers.

The results associated with the illegal activities include pedestrian knockdowns and car crashes.

Along the motorway, burgeoning slums and shanty towns with unacceptable living conditions for their residents could trigger humanitarian crises in those areas.

Slum dwellers have converted the bare land serving as a buffer between the motorway and the settlements into vegetable farms.

One of the farmers, who admitted engaging in a risky activity along a busy highway, said he had been operating there for a few months without any trouble and was hopeful that he would not face any danger.

Asked how he came by the land, he said it was leased to him by some slum dwellers who first started farming on the land some years ago.

Caught in the act

At a point, the Daily Graphic saw a taxi enter a ditch when the driver tried to use an illegal U-turn which had been barricaded with galvanised pipes to enter the Accra-bound side of the motorway from the Tema end.

Most of the galvanised pipes used to barricade the illegal U-turn spots had been broken down, allegedly by recalcitrant drivers who insist on using such illegal turns on the motorway.

It was also observed that fully loaded trucks had parked along the shoulders of a segment of the busy motorway.

At least 15 trucks were parked along the shoulders, either to get faults fixed or for the drivers to take a nap.

Most of the trucks were carting transit goods from the Tema Port to landlocked countries such as Burkina Faso and Mali.

An illegal route that was created close to the KICC Bus stop - an illegal bus stop - which had caused an accident when the Daily Graphic visited the area last year was closed with rocks.

However, trotro drivers were still stopping at the illegal bus stop to pick and drop passengers.

An Okada rider, Mr Promise Dakey, who claimed to have helped in blocking the illegal road close to the KICC Bus stop about a month ago, said accidents at the spot had since reduced.

“Before it was blocked, every day you heard of an accident at KICC, but since we blocked that road, accidents have reduced; but you can see the drivers are trying to create other routes,” he said.

The situation on the highway, he said, needed urgent government attention to bring lasting solutions to the indiscipline activities.

Also observed on the entire stretch were some drivers who used the shoulders of the road to jump traffic, in contravention of the Ghana Highway Code.

Some tricycle riders also drove on the wrong side of the expressway, inconsistent with their speed, thereby compelling other vehicles to do wrongful overtaking.

A few others were also seen trying to create unapproved U-turn spots and criss-crossing the highway with loads of refuse or consumables. 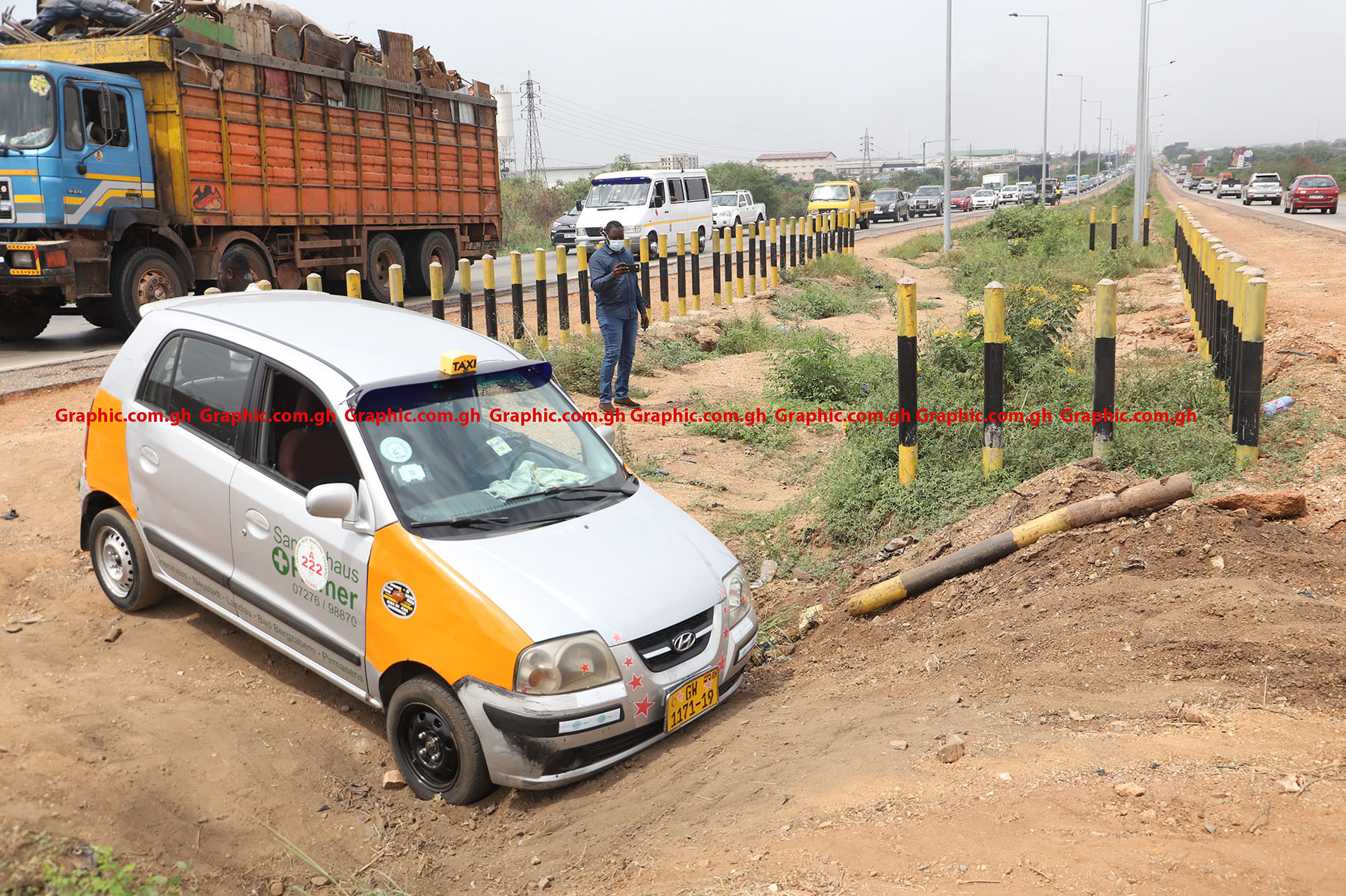 Commercial activities, including hawking and makeshift workshops, had sprung up along both sides of the motorway.

Right at the entrance of the motorway close to the Accra Mall were food vendors and a vulcanising workshop operating permanently under a sign post: ‘No Hawking’.

Around the under bridge, commercial activities were brisk and rubbish were being burnt just on the shoulder of the motorway.

It was also a spot where trotros stopped indiscriminately to pick passengers.

The Daily Graphic saw a policeman who had arrested a trotro driver at the spot.

“This car has been arrested; the rest are all doing the wrong thing but I am the only one here and so it’s difficult,” the policeman said.

When contacted, a source at the Ghana Highway Authority (GHA) told the Daily Graphic that the motorway had outlived the purpose for which it was constructed in 1964, and that had contributed to some of the acts of indiscipline witnessed on it on a daily basis.

"When the motorway was first constructed, there weren't people living along it and it was not meant to serve such huge traffic, but now the motorway needs to be redesigned to check some of these indiscipline acts.

“I know that financing arrangements will soon be made for contractors to begin work on it, so we can expect to see some improvement in terms of the conduct of users of the road when the redesign works are done," the source said.

Already, it said, the contract for the design and construction of the motorway from the Tema Interchange through the Apenkwa Interchange to the Neoplan Junction in Achimota had been awarded to the engineering firm, Mota-Engil, Engenharia E Construcao Africa SA.

In the meantime, it said, the Motor Traffic and Transport Department (MTTD) of the Ghana Police Service would be put on high alert to monitor the situation on the motorway to arrest and prosecute offending road users.