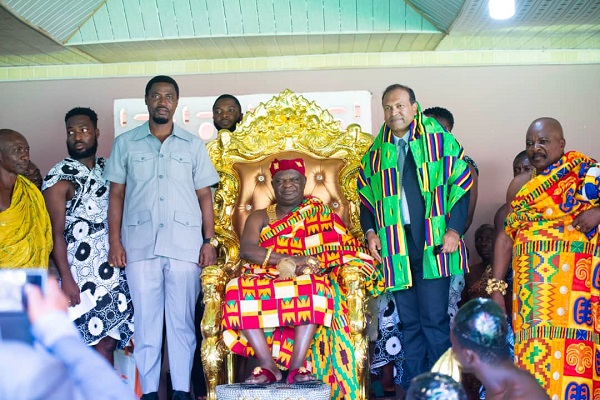 He was in the traditional area to explore business opportunities and build a new friendship between the two on how to enhance the economic fortunes of India and Sefwi.

The High Commissioner was welcomed in a colourful traditional ceremony to the Okugyeabour Fie, the palace of the Sefwi Wiawso Traditional Area with the regional minister, Richard Obeng, in attendance.

The Paramount Chief of the Sefwi Wiawso Traditional Council, Katakyie Kwasi Bumagama ll, said the area abounds with many potentials including agriculture which the two could work together to add value as well as create jobs for the youth.

In a frank discussion, Katakyie Kwasi Bumagama ll said being part of a newly created region of the country, his area was bedevilled with a myriad of infrastructural challenges and expressed the hope that the new relationship will help address it.


Areas that the Chief and the High Commissioner looked at included tourism which he said remained untapped.

As a starter, the High Commissioner will attend this year's annual Eluo Festival by the people of Sefwi Wiaso on November 24 and 25 to help develop a document towards improving the celebrations.

"It is my hope that the rich culture of India and that of Ghana will open avenues for tourism in the Sefwi Wiawso traditional area," the Chief said.

The Sefwi Wiawso Paramount Chief appealed to the High Commissioner to assist in securing scholarships for brilliant but needy students, especially those pursuing Science, Technology, Engineering and Mathematics degrees.

Also on the radar was an initiative for an exchange programme with the Sefwi Wiawso College of Education and Colleges of Education in India to enhance academic work.

Katakyie Kwasi Bumagama ll called for the reactivation of a Memorandum of Understanding (MoU) to establish a Cocoa Processing Factory (CPF) in Sefwi Wiaso which was truncated by the COVID-19 pandemic.

He suggested that this could be done with the support of an Exim Bank Loan facility to actualise it.

Katakyie Kwasi Bumagama ll told his guest that Sefwi lands abound in rich deposits of gold and timber resources adding that lack of employment is forcing the youth to leave the area in search of greener pastures.

He urged the High Commissioner to help set up refinery factories to absorb most of the youth.

The High Commissioner, Mr Sugandh Rajaram, commended the Council and the Western North Regional Coordinating Council for the rousing welcome.

He promised to build on the relationship that had existed between Ghana and India for decades with Sefwi as the new focus.

"Accra alone should not see development from the Indian government and other regions should not be left out," he said.

The High Commissioner was later decorated with a rich Kente cloth to symbolise the rich culture between the two countries.