Increase in food crop prices not failure of PFJ 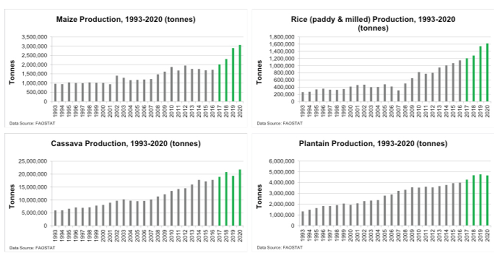 On March 16, 2022, I watched a YouTube video in which the Minister of Food and Agriculture, Dr Owusu Afriyie Akoto, was being interviewed on a local television programme, the Citi Breakfast Show.

During the interview, the host and his co-host sought to suggest that the Planting for Food & Jobs (PFJ) policy had failed or was ineffective because food prices were increasing, an argument I have heard some Ghanaians make.

To add to the rebuttal by the sector minister, I decided to put this article together to show why or how food crop prices can increase, despite the increases in food crop production contributed to by the PFJ policy.

The PFJ policy has not failed, and so it is either those who make the argument do not really understand how the policy works or their argument is for propaganda purposes, by just looking at the crop production data without firm economics reasoning. I think most of the people make that argument based on the latter.

In terms of how the policy works or the aim of the PFJ, basically, the policy was rolled out by the government to promote agriculture as a means of employment for Ghanaians, especially the youth.

Another aim of PFJ is to increase food production or for food security purposes, as well as reduce the importation of some of our staple food crops.

The policy was launched in April 2017 and according to the Food and Agriculture Organization Corporate Statistical Data (FAOSTAT) data, Ghana's production of crops such maize, plantain, cassava, rice (both paddy and milled) and yam increased between 2017 and 2020 compared to the previous years (see the crop production charts below).

With the aforementioned crops being mainly annual crops (although plantain take bit over a 12-month period), the increase in crop production between 2017 and 2020 can be said to be a reflection of the contribution by the PFJ policy.

So, the question is, how come there are increases in crop production, but food crop prices are increasing? The answer(s) is simple: increase in farm related costs, commensurate increase in food crop demand and the fact that farmers are free to sell to any buyer willing to offer the highest possible price.

Although the estimates are in US dollars per hectare or per acre, those who want to see the cost in Ghana cedis can use the exchange rates for the two different years.

The estimates showed that 2021 fertiliser cost increased by at least 70 per cent in 2021, compared to 2016 cost estimates, which have reflected in the increase in food crop prices we are seeing today.

Another way of analysing the issue is through break-even analysis and in farm economics, one of the metrics for such assessment is the Break-Even Ratio (BER), which more or less measures the viability of input use.

The BER is estimated by dividing cost of the farm input by the value of the crop produced.

In terms of fertiliser use, the BER is the cost of the fertiliser divided by the value of the crop produced, and it represents the amount of crop yield needed to pay for a kilogramme of fertiliser nutrient.

Considering the number of inputs used by a farmer to produce one crop, it means whenever there are significant increases in input prices, like we are seeing now, farmers have to increase the price of their produce so as to at least break even.

It is worth noting that, the PFJ policy was not rolled out by the government to buy every tonne of crop produced by each farmer subscribed to the programme, which means farmers are free to sell their produce to any buyer.

Therefore, as profit maximisers, farmers will combine resources to produce a crop (e.g. maize), so as to generate the maximum profit possible.

This means that regardless of the level of output (low or high), and with increased demand for food crops, farmers will sell their produce to the person offering the highest price.

Also, as part of profit maximisation, any increase in farm and transportation cost is transferred to the consumer through increase in food crop prices.

So, to conclude, the PFJ has contributed to increase in food crop production and that is a fact! With a market environment like Ghana's, food prices can increase even under increased food crop production, especially when there is commensurate demand, farmers are free to sell to the 'highest bidder' and any increase in farm related costs (inputs and transportation) is passed on to the consumer.

That does not mean the Planting for Food and Jobs policy has failed!

The writer is an agricultural economist and is currently a Senior Research Analyst at S&P Global. Feedback: This email address is being protected from spambots. You need JavaScript enabled to view it.