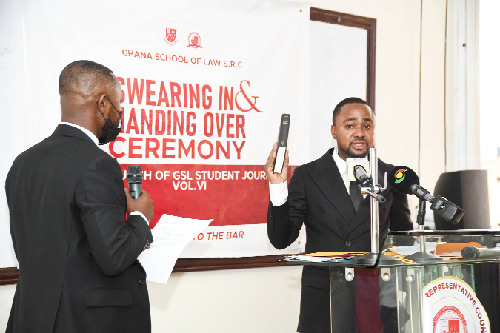 Mr Lord Percival Agbavor Jnr (left) administering the oath to Mr Wonder Victor Kutor as the new President of the SRC of the Ghana School of Law. Picture: EBOW HANSON

Inadequate infrastructure should not be used as the basis to deny applicants admission to the Ghana School of Law (GSL), the executive council of law students has said.

The new Executive Council of the Students Representative Council (SRC), led by its President, Mr Wonder Victor Kutor, who expressed the sentiments, said no applicant who passed the entrance examination should be denied admission to pursue a professional law programme on the basis that there were not enough spaces to admit such applicants.

For him, all applicants who passed after writing the six subjects in the entrance examination should be admitted accordingly.

Mr Kutor made the call in his acceptance speech during the swearing-in and handing-over ceremony of new SRC executive members at the GSL in Accra last Friday.

The Chief Justice of the student body, Justice Lord Percival Agbavor Jnr, led the executives to take their oath of office.

Suggesting an alternative arrangement, the Law School SRC President said campuses could be rented where lecturers would deliver their lessons.

“We cannot use lack of infrastructure to deny people admission. The Greenhill Campus is a rented place at GIMPA. Why can’t we also rent places at the University of Ghana and the UPSA to serve as campuses for the GSL?” Mr Kutor asked rhetorically.

“Alternative arrangements should be made to accommodate these applicants, should all of them pass, for them to pursue the professional law programme at the GSL. They cannot be denied with the excuse that facilities are inadequate,” he noted.

He explained that what happened in 2019 when just 128 applicants passed and were admitted should not be repeated.

Mr Kutor said it was his expectation that many applicants would be admitted this year after they had written the examination on August 24.

The SRC President appealed to the General Legal Council (GLC) to be guided by the recommendation made by the Parliamentary Committee on Constitutional, Legal and Foreign Affairs to allow students seek re-marking of the Bar examination at a reduced fee when they were said to have failed.

“When students write six papers and pass three but fail three, let them go to the next stage and rewrite the papers they failed. You cannot let them write what they have passed already. This is not to encourage failure but to write what you failed,” the president said.

The Director of Legal Education at the GSL, Mr Kwasi Prempeh-Eck, who chaired the swearing-in ceremony, called for cooperation from the SRC.

He urged the SRC executive to uphold the ethics of the legal profession, adding that the profession was a distinguished one that commanded compliance with its ethics in order to promote confidence in the justice delivery system.

He added that adhering strictly to those values and the regulations of the institution would not only promote their cause as students of law but  also as leaders of the community.

“Character is very important, so you must learn to be leaders the best way possible. You are here to become lawyers, so you should subject yourself to the regulations of the school, as well as the codes and ethics of the legal profession,” he said.

He said for the image of the GSL to be projected, the SRC would have to play a key role.

“If Ghanaians want to be happy to see what they want from the GSL, the SRC must play its role,” Mr Prempeh-Eck noted.

The Registrar of the school, Mrs Juliet Adu Adjei, for her part, advised the students to be minded by the reason they were in school, which was primarily to become lawyers.

“Students should follow appropriate structures. If there are concerns, they should pass them through the SRC,” she admonished the students.

The outgoing SRC President, the first female to lead the affairs of the SRC in acting capacity, Ms Abokomah Amissah-Koomson, in her remarks, urged the executive body to serve with a clear conscience.

“Take criticisms in good faith, bearing in mind that not every critic has an evil intention, and ultimately balance your books with your leadership role,” she said.

She further urged them to remember at all times that they were on an academic journey to be called to the Bar, hence the need for them to remain disciplined in the profession.

Fifteen members forming congress, which is represented by five members from each campus, were also sworn in.

The congress is headed by a Speaker and assisted by a deputy and a clerk.

On that same day, the Chief Justice for the SRC, Lord Agbavor Jnr, was sworn in by the outgoing Chief Justice, Her Ladyship Regina Amegah, who was represented by Kate Aborley.

The swearing-in ceremony came on the back of the elections in April, this year for a one-year tenure of office.

The swearing-in and handing over became possible only after an audit into the accounts of the previous SRC, pursuant to articles 30 and 31 of the GSL SRC Constitution.

The occasion was used to launch the sixth edition of the GSL students’ journal.