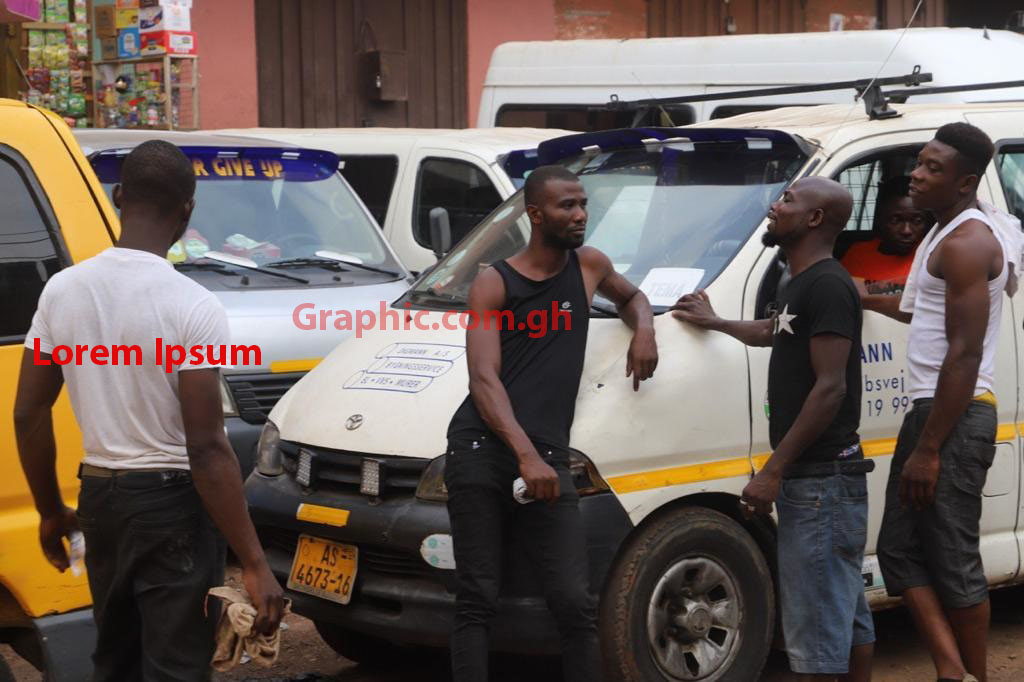 Some drivers at Dr Mensah lorry terminal, in Kumasi, going about their normal duties with no regard for the COVID-19 safety protocols. Picture: EMMANUEL BAAH
30.5k Shares

Some commercial drivers, who operate from the Dr Mensah Lorry Station near Kejetia in Kumasi, have ignored the laid down protocols instituted to help control the spread of the COVID-19 virus.

During checks by the Daily Graphic last Thursday, some drivers were spotted in a heated argument as they awaited their turns to transport passengers to their various destinations.

Dr Mensah is a well-known commercial area in Kumasi, not too far from the Kejetia Market, where one can easily board a vehicle to Mampong, Ejura and even to the outskirts of the Ashanti Region, including Atebubu in the Bono East Region.

The argument of the commercial drivers was about their colleague who had passed on and they were deliberating on how they would observe the funeral rites in line with the restrictions on mass gathering.

Some of them who spoke to this reporter, however said though reports from the Komfo Anokye Teaching Hospital (KATH), where their friend was hospitalised after a short illness, indicated that their colleague died of COVID-19, they still did not believe that the virus existed. To them, their colleague had died a natural death.

“Please, we are tired of this so-called Chinese virus. Do you think this virus can survive under this hot sun?” One of the drivers asked this reporter, who had approached them to find out why they were not observing the safety protocols.

Another driver, who only gave his name as Lokko, said he personally used to wear the nose mask but had stopped “because it makes me feel uncomfortable”.

He explained that he was asthmatic and that anytime the nose mask was on he found it very difficult to breath.

Asked whether or not they had gone to take the COVID-19 vaccine, the drivers said they were yet to go for the shots.

Although a large number of them had made up their minds to take the jab, a few doubting Thomases had vowed not to take the vaccine, notwithstanding the repercussions.

One of the station masters (name withheld), who was in his nose mask, told this reporter that all efforts to get the drivers to adhere to the safety protocols had proved futile.

“At times when they see us (station masters) come, they swiftly pull out their nose masks from their pockets and wear them,” he added and appealed to the Kumasi Metropolitan Assembly (KMA) to mobilise its taskforce to help arrest the recalcitrant drivers to serve as a deterrent to other drivers.