In a fit of rage: Landlord shoots tenant 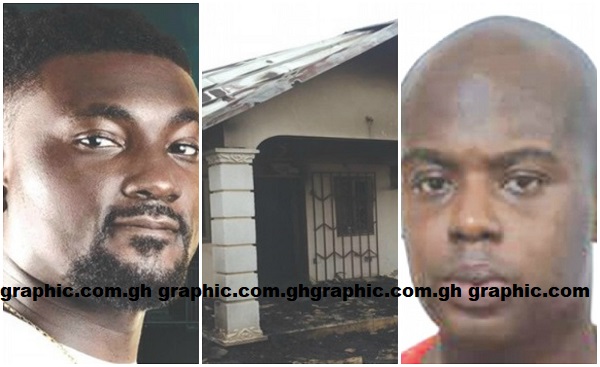 From L-R: Benjamin Okyere, the victim - The apartment, after the youth had set fire to it - Victor Stephen Nana Kankam, the landlord.
30.5k Shares

A brutal afternoon shooting act allegedly perpetrated by a landlord at Ofankor in Accra has ended the life of his tenant.

In a fit of rage, the landlord, Victor Stephen Nana Kankam, who could not withstand the refusal of the tenant, Benjamin Okyere, to vacate a room he rented out to him, allegedly picked a gun and shot him in cold blood.

The incident sparked some outrage from the public and yesterday morning, some people set fire to the apartment in retaliation.

The police have arrested Kankam while investigations are underway.

The victim, aged 31, popularly known as Trillionaire, was a budding musician, known for his album, titled Pon Dem.

Adopting a child in Ghana; New Act makes it simpler

Nigeria has 'no money' to import food

According to eyewitnesses, Okyere’s two years’ tenancy agreement was to expire on May 24, 2020.

Consequently, the landlord is said to have called Okyere and warned him not to spend a day more after the expiration of the tenancy.

Kankam is alleged to have asked Okyere to pack out of the room and leave the key to the room with any of the other tenants as he did not want to set his eyes on him after May 24, 2020.

The apartment, after the youth had set fire to it

Confirming the shooting incident to the Daily Graphic, the Public Relations Officer (PRO) of the Accra Regional Police Command, Deputy Superintendent of Police (DSP) Mrs Effia Tenge, said at about 1:33 p.m. on May 24, 2020, Kankam went to the house and on seeing Okyere at the main entrance, he shot him.

She said the victim was taken to the Mile Seven Police Station in an unconscious state with multiple gunshot wounds on his body.

The police subsequently took the victim to the Police Hospital but he was pronounced dead on arrival.

Now the police are holding Kankam on a provisional charge of murder.

DSP Tenge said the Mile Seven District Police Commander, Deputy Superintendent of Police (DSP), Mr George Asare, led a team of police personnel to the crime scene where bloodstains were seen at the main entrance to the house.

The police, she said, also retrieved four spent bullet shells at the scene.

After picking evidence at the crime scene, she said, the team proceeded to the residence of Kankam which was also located at Ofankor Spot M and arrested him.

When a search was conducted at the residence of Kankam, she said, the police found two pump action guns loaded with seven and eight rounds of cartridges each, as well as 32 live cartridges.

Following the shooting of the victim and the arrest of Kankam, some angry youth in the area, who heard about the incident, set fire to the apartment where the victim lived.

Mrs Tenge said the police had restored calm in the area while the body of Okyere had been deposited at the Police Hospital morgue.