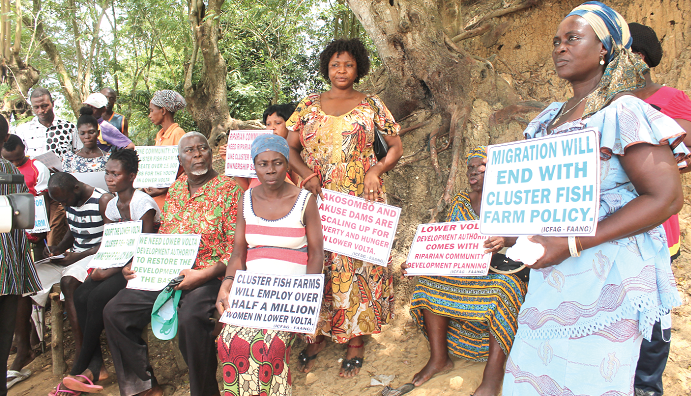 Some residents of Aveyime, a fishing community in the Volta Region, with placards calling for government support Picture: EDNA ADU-SERWAA
30.5k Shares

Residents in fishing communities along the Lower Volta Basin (LVB) have called on the government to adopt and implement the small-scale cluster fish farm ownership system as a measure to restore their source of livelihood.

They said the lack of political will by successive governments to implement the policy, which formed the core of recommendations of a research work on how to restore the depleting fishery stock in those communities, had posed serious socio-economic challenges to the residents.

The University of Ghana (UG) conducted the research in 1999 to assess the impact the construction of the Akosombo and Akuse dams had on the people.

Specific recommendations were made for the government to design the small-scale aquaculture initiative to support the fisherfolk, but no pragmatic steps have been initiated since the research.


To press home their demands, two advocacy organisations, the Inland Culture Fisheries Association of Ghana (ICFAG) and the Fisheries and Aquaculture Alliance Network of Ghana (FAANG), last Friday toured some of the communities within the LVB.

The Policy Advocacy Advisor of FAANG, Mr Godwin Awudi, called for immediate steps by the government to tailor its agriculture policy “Planting for Food and Jobs” to suit the needs of the fisherfolk.

“The LVB used to be a booming area for wild fishing and clamp culture. The industry provided economic empowerment to the residents, including women, who survived on clamp culture. But now, the construction of the dams have deprived them of their economic livelihood,” he said.

He underscored the need for pragmatic steps to be taken by the government to support the fisherfolk in the area through the small-scale cluster fish ponds programme to resuscitate the local industry.

Some residents in the communities visited expressed concern over the activities of Chinese fishermen who had taken over the cage aquaculture activities along the LVB.

According to 30-year-old Edwin Avorganu, the local fishermen did not have enough resources to compete with the Chinese who hired the services of the locals at a cheap cost.

The National Coordinator of the ICFAG, Mr Simon Ogah, pointed out that the collapse of clamp culture and the dwindling fortunes of the fishing industry in the LVB had resulted in social challenges such as increased cases of teenage pregnancy and migration of the youth to urban areas.

He said development had worsened the poverty in those fishing communities and called for urgent adoption of the research recommendations to restore the livelihood of the people.