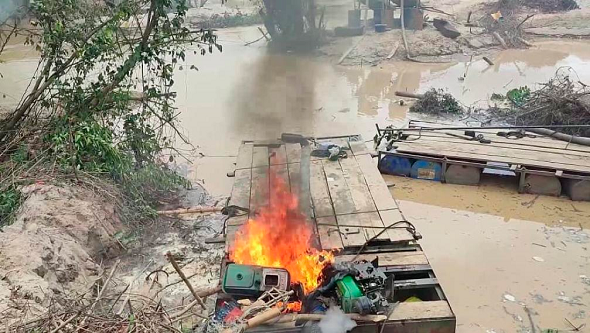 Some of the mining equipment set ablaze
30.5k Shares

Five persons, including the Assembly Member for the Kotokuom Electoral Area, Akwasi Poku, have been arrested in connection with illegal mining activities in some communities along the River Offin in the Ashanti Region.

They are Nana Yaw Owusu , Nana Appiah, Opanyin Kuffour and Opanyin Kwaku Duah. They are among seven elders that have been selected to serve as Dikro in the absence of a chief for Kokotuom

They have been handed over to the Nyinahini Police for the necessary legal action.

Also, 300 chanfans used in their activities were impounded and burnt down during the two-day operation carried out by a task force put together by the Ghana National Association of Small-Scale Miners (GNASSM), in collaboration with the district assembly.

A large number of illegal mining operators, on seeing the task force, fled, leaving their mining equipment behind.

Meanwhile, Poku’s arrest is seen as significant, as residents allege he has been at the forefront of illegal mining activities in the area, with the backing of some traditional leaders in the area.

The task force last Monday led some selected media houses on a tour of the polluted Offin River and destroyed forest reserves as part of the campaign against illegal mining in the area.

The Vice-President of GNASSM, Sampson Kofi Wiredu, explained that the tour was to give the media an insight into what was happening and confirm that, indeed, some traditional leaders and people in leadership roles were deeply involved in illegal mining, which was threatening their jobs.

He said the association was keen to lend support to the Ministry of Lands and Natural Resources to fight the social menace.

“People are very much involved in galamsey and it is affecting all of us. We will expose and report any traditional leader who will be found in connection with illegal activities in his community,” Mr Wiredu cautioned.

He commended residents for giving the hint which led to the arrest of the assembly member, saying that all needed to come on board to fight the menace.

The District Chief Executive for Atwima Mponua, Isaac Kofi Marfo, pledged to support the association to flush out all those engaged in illegal mining activities on the river and the forest reserves in the district.