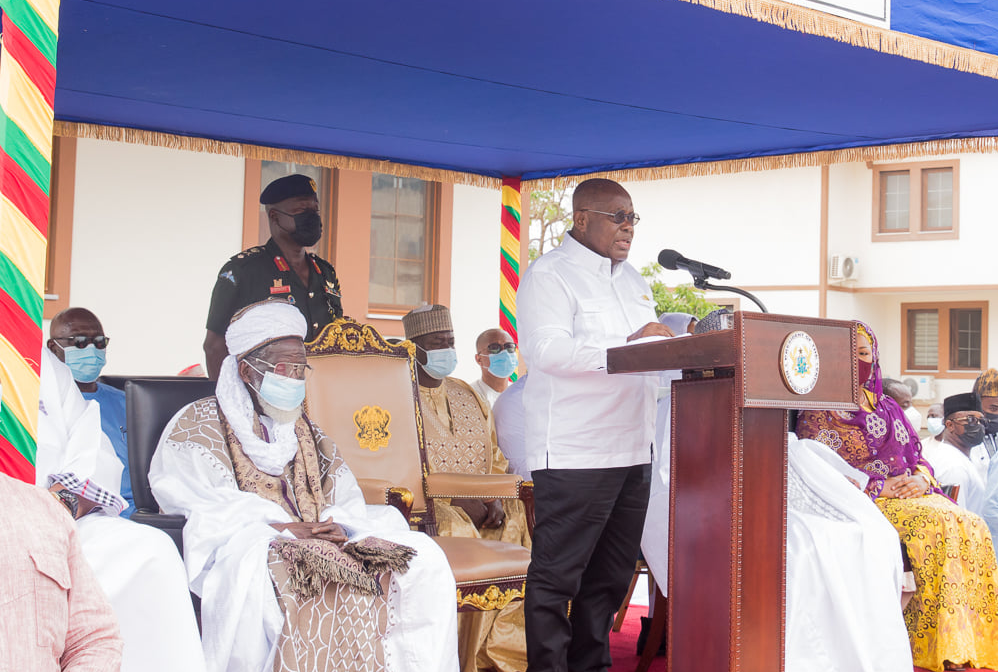 President Nana Addo Dankwa Akufo-Addo has said his unflinching support and that of his administration to free media remains unquestionable.

That commitment, he said, was evidenced by the atmosphere of free speech prevailing in the country.

However, he said in the midst of the freedoms, it was incumbent on all to be measured in whatever they put out because ‘words could be as incendiary as guns”.

President Akufo-Addo said this when he joined Muslims at the newly inaugurated National Mosque Complex at Kanda in Accra on Tuesday, July 20, for the Eid- ul-Adha prayers.

Eid-ul-Adha commemorates the story of the  Prophet Ibrahim's test of faith when he was commanded by God to sacrifice his son, Ismail.

The festival also marks the end of the annual Hajj pilgrimage.

Making reference to the Holy Bible, which mentions that death and life are in the power of the tongue, the President reminded his country men and women  that the tongue, if not properly used, could be destructive.

He said it took the muttering of words by irresponsible journalists, amplified by the power of radio, to ignite the tragic genocide in Rwanda.

“It is important for all of us to recognise that there's only one country we call home and that is Ghana. We must protect our way of life with, in the words of the national pledge, all our strength and with all our hearts,” he stated.

President Akufo-Addo cautioned against allowing the actions and utterances of a few misguided persons to jeopardise and destroy the united country which had been the envy of many on the continent and the world at large.

Taking a look at COVID-19, the President urged Ghanaians to continue to be responsible and observe the safety and hygiene protocols to avoid a full-blown third wave.

He said the recent hikes in the number of infections was a source of worry for him and all Ghanaians.

“From the rising numbers, it is safe to conclude that we have let our guard down. We're beginning to live our lives and conduct our businesses as though we are in normal times.

“As we continue to count on the grace of God to protect our country from the ravages of the pandemic like we have done since its outbreak, we can only minimise its health effects and avoid a full-blown third wave, if we continue to be responsible and observe the safety and hygiene protocols,” he said.

President Akufo-Addo reminded Ghanaians that the virus was still causing ravages and that until Ghanaians received a double dose of the vaccine, the protocol must continue to be a part and parcel of all daily activities.

He gave an assurance that the Ministry of Health was working hard to ensure that even in the midst of a global shortage of vaccines, the target to vaccinate 20 million Ghanaians was undertaken.

“Until that goal is achieved, I will continue to count on the support and cooperation of the Ghanaian people to ensure our collective security,” he added.

President Akufo-Addo stated that the Ministry of Finance recently gave financial clearance to the Ministry of Education and the security agencies to recruit some 11,800 people to beef up their operations.

Additionally, he said, the Minister of Finance, through the mid-year budget to be presented before Parliament tomorrow, would announce the creation of some one million jobs under the Ghana Cares Obatanpa project in the course of the next three years.

He said the measures were part of the government’s determination to pursue its agenda for job creation to give opportunities to the youth to nurture their talents for the development of the country.

Turning his attention to development projects, President Akufo-Addo said the numerous projects and programmes the Zongo Development Fund and the erstwhile Ministry of Zongo Development had undertaken across the country were being inaugurated.

He called on the youth in the Zongo communities to take advantage of the developments to develop their talents and thereby contribute to the development of the country.

All those projects that were taking place, the President explained,  were part of the fulfillment of the New Patriotic Party’s promise to the people. 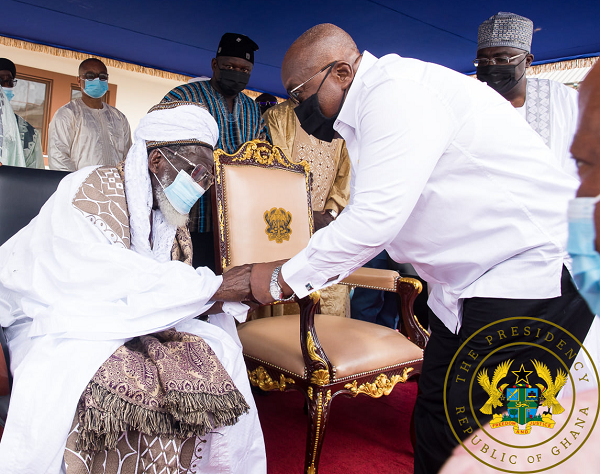 Touching on the significance of the occasion, he said it was difficult to celebrate Prophet Ibrahim without talking about the religious unity and harmony of the country.

He spoke about the National Mosque where the occasion was observed and said the edifice was a testimony to the religious unity and harmony prevailing in the country.

In his Eid message, the National Chief Imam, Sheikh Osman Nuhu Sharubutu, stressed on peace, which, he said, was a major prerequisite for development.

He said Muslims had a sacred duty to not allow personal interest to overshadow the overall good of the society.

Sheikh Sharubutu admonished Muslims to bear in mind the significance of the demand of God on Prophet Ibrahim to sacrifice what was dear to him - his son - to God.

He explained that it was incumbent on Muslims to also sacrifice for one another, their families, unknown people and the nation to make the world a better place for all.

After the prayers and speeches, the National Chief Imam, in the company of the President, Vice-President Mahamudu Bawumia and his wife, Mrs Samira Bawumia, and other dignitaries, sacrificed a sheep at the prayer grounds.