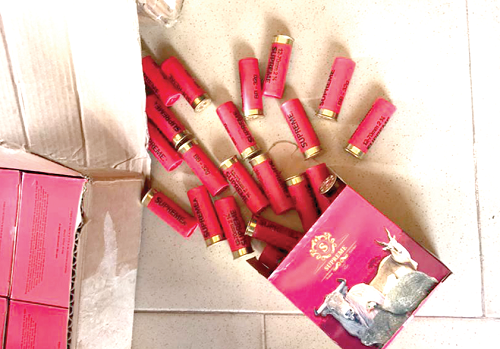 A driver and his conductor are assisting the Hohoe District police in investigations into the ownership of ammunition found on their commercial vehicle.

The ammunition intercepted included two cartons of AAA and BBB cartridges which were on board their red Yutong bus with registration number GT 5919-16.

The 29 passengers on board the vehicle which was en-route to Kpassa in the Oti Region have all denied ownership of the cartridges.

The Volta Regional Police Public Relations Officer, DSP Effia Tenge, said the bus was travelling from Accra when the police team, acting on intelligence, flagged it for a search at 3:45 p.m.

The two cartons containing the cartridges were found concealed in the side compartment of the bus during the search.

The driver in charge of the bus, Robert Ofosu Nyanor, 50, and his conductor, Godwin Aniwo, 32, were immediately placed under arrest for further interrogation and the bus impounded.

They have, however, been released on Police enquiry bail while investigation continues.