There was excitement in Ho yesterday when President John Dramani Mahama cut the sod for work to commence on the Ho airport project.

A large number of people thronged the site of the project in a jubilant mood, and in the words of the Agbogbomefia of the Asogli State and President of the Asogli Traditional Area, Togbe Afede XIV, “there cannot be a better symbol of development than an airport in Ho”.

When completed, the facility will have, among others, a runway of 1,900 metres in length and 30 metres wide, an aircraft parking area, a terminal building to hold at least 150,000 passengers a year, a VIP and VVIP facility, a parking area for the staff and a nine-kilometre network of roads around the airport.

Cost of project
The Ghana Airports Company Limited is financing the project, the first phase of which will cost $25 million.

Amandi Construction, contractors for the work, are currently erecting parameter fencing on the 1500 acres released by the Asogli Traditional Area for the project.

President Mahama said as part of the design, an airport city was being planned close to the facility by the Town and Country Planning.

He gave an assurance that the Ghana Airports Company Limited would do everything to ensure the project was successfully carried out.

Benefits
Touching on the benefits, President Mahama said the Ho airport would boost the economy of the Volta Region.

He said for instance that it would enhance tourism in the region and create jobs for the people.

President Mahama said the aviation industry was growing, adding, for instance, that from 700,000 domestic passengers, the number increased to 2.5 million in  2014.

He said the first phase of the Tamale airport expansion project would be completed early next year. 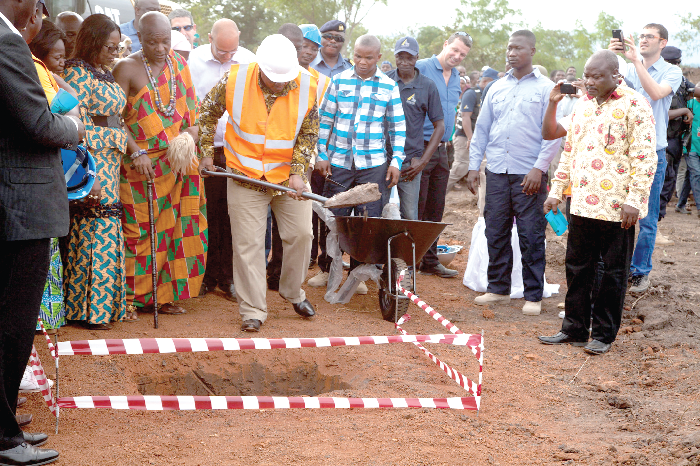 Assurance
The Chief Executive Officer of the Ghana Airports Company Limited, Mr Charles Kwame Asare, said the Ho airport was the first such facility to be built  by the company since it was decoupled from the Ghana Civil Aviation Authority.

The Minister of Transport, Mrs Dzifa  Aku Ativor, told the people of the Volta Region that the government would never turn its back on them.