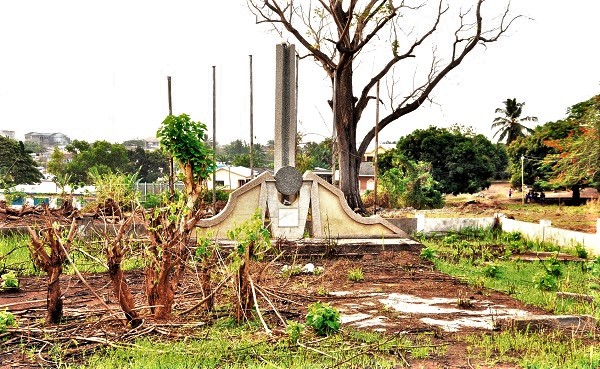 The Ho Cenotaph, which was hidden in shrubs for many years, has now been laid bare, further revealing its sordid state.

This follows the clearing of the site for a new regional office building for the Audit Service.

The structure was built 27 years ago by the Volta Regional Coordinating Council (VRCC) in 1996 at a cost of GH¢900.

It initially served as the venue for Remembrance Day and other events of the security agencies.

After a few years, however, the cenotaph was left to decay, fade and fall into a horrible state, contrary to the purpose for which it was constructed.

The crumbling cenotaph is just metres away from the VRCC, Regional Health Directorate, the uncompleted Regional Library building, the Ho Museum and the Anglican Basic Schools.

Until the weeds around it were cleared, some members of the community attended nature’s call there, with rodents also having a field day.

The stench emanating from the excrement around the monument poses a huge public nuisance.

“This is rather a big insult to our war heroes,” a visitor to the place remarked.

The Daily Graphic recently gathered that the Old Durbar Ground where the cenotaph stands is a state land and, therefore, falls under the management of the Regional Lands Commission.

However, the Regional Lands Officer, Mr Nuviade Nukunu, explained that the maintenance of the land and the cenotaph was the responsibility of the user agency — the Ho Municipal Assembly.

The Ho Municipal Chief Executive, Mr Divine Richard Bosson, however, said the land was no longer a durbar ground because it had long been let to the Ghana Investment Fund for Electronic Communications and the Audit Service.

"So, it is their duty to maintain the ground and the cenotaph,” he said.

For now, a large section of the public favours a complete demolition of the cenotaph, rather than maintaining what could rightly be described as an affront to the memory of gallant heroes.