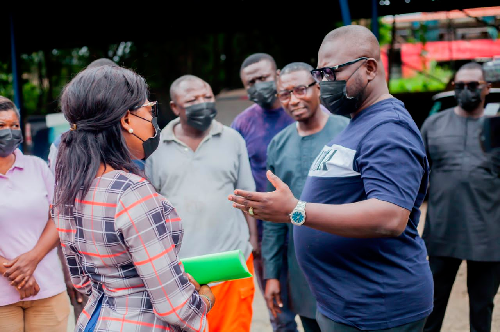 Mr Francis Asenso-Boakye (2nd right), the Member of Parliament for Bantama, intracting with staff and management of Neoplan Ghana Limited

The Member of Parliament (MP), for Bantama, Mr Francis Asenso-Boakye, has appealed to state institutions to order some of their vehicles from Neoplan (Ghana) Limited to turn round the fortunes of the company.

He said the financial challenges that threatened the very existence of the auto production company could ease and return on the path of progress if state institutions channelled some of their procurement from the company.

Mr Asenso-Boakye, who is also the  Minister of Water Resources, Works and Housing made the appeal when he paid a familiarisation visit to the Kumasi factory located at Abrepo Junction, in the Bantama Constituency to acquaint himself with developments at the plant.

Emphasising the need for the channelling of resources into the once vibrant company to help create jobs for the teeming youth and boost the local economy, the MP said,“For those of us who grew up around this area, we saw a robust establishment that provided direct and indirect jobs to many of our people.

“I believe, therefore, that if we revamp this factory, it will help address issues of unemployment facing the youth in this area and Kumasi at large.”

He added: “As Member of Parliament, I humbly appeal to the authorities to give Neoplan Ghana Limited the needed attention and bring it back to life, because it has the potential to compete with other foreign vehicle manufacturing companies. I know President Nana Addo Dankwa Akufo-Addo is committed to job creation and would be happy to see this factory working again if he should see things for himself.”

Mr Asenso-Boakye said reviving the company, which operated bus production plants in Kumasi and Accra, would create jobs for the people.

He asserted that the visit to the factory had given him a first-hand understanding of what needed to be done to see to its revitalisation.

“Neoplan Ghana Limited has over the years been known for producing buses in Ghana and has served various clients, including government institutions, transport companies and the private sector.

“Regrettably, the factory has been out of operations in the past years for various reasons,” he said.

Neoplan (Ghana) Limited, which has been in existence since 1974, has produced over 4,000 buses for government institutions, universities, private transport unions and other organisations.

The government of Ghana has majority shares in the company, with 55 per cent shares, and the remaining 45 per cent is for a private investor.

A timely intervention by the government last year prevented the closure of the company by management who complained of lack of contracts and persistent losses.