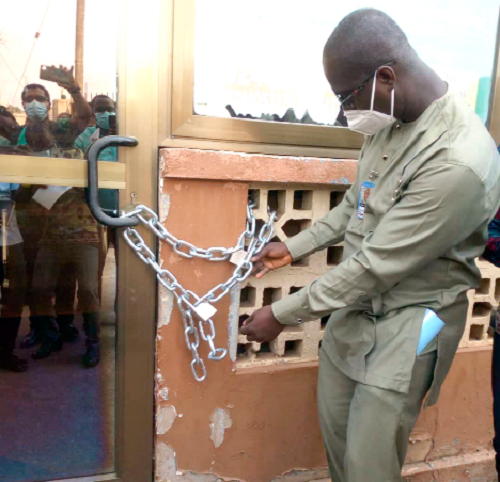 The Health Facilities Regulatory Agency (HeFRA) has shut down four health institutions in Accra for operating without licence.

The affected institutions are the Advanced Body Sculpt Centre, also known as the Obengfo Hospital at Weija, the Susan Clinic at Latebiokorshie, the China Recovery Clinic, and the Grace Diagnostic Clinic, both located at Achimota.

The Health Institutions and Facilities Act 2011, Act 829, which established the HeFRA, empowers it to shut down any health facility which does not meet standards established by the law.

Per the law, a person shall not operate a health facility unless it is licensed under the act.

A team, led by the Registrar of HeFRA, Dr Philip Bannor, closed the facilities yesterday in an enforcement exercise being conducted by the agency.

The team, comprising officers of HeFRA, the police and personnel from the Ghana National Ambulance Service stormed the facilities unannounced and moved to close them after they had failed to produce their licences.

Two of the closed health facilities — Susan Clinic and China Recovery Clinic — were not operating when the team arrived on their respective premises.

At the Susan Clinic, it was gathered that the operator of the facility had not been practising since December 31, 2020 following his arrest by the police over some "illegal activities" at the clinic.

The China Recovery Clinic, on the other hand, had its gates locked with no official of the facility present when the team from HeFRA got there.

The team pasted closure notices at the entrances of the clinics to officially signify that the facilities had been shut down.

An interesting scene was played out at the Obenfo Hospital and the Grace Diagnostic Centre as both facilities, which were operating, could not show proof of having been licensed to operate.

The Chief Executive Officer at the Obenfo Hospital, Dr Dominic Obeng-Andoh, who was agitated by the action, initially challenged the appropriateness of the exercise insisting that he had the licence to operate.

He described the exercise as "an act of mischief", adding that "you are targeting us and want to paint us black."

"We have been operating for the last 20 years and there's no way we'll be doing this without a licence," he claimed.

After more than an hour of haggling, Dr Obeng-Andoh could not produce his licence.

In response to Dr Obeng-Andoh’s claim that he had a licence to operate, Dr Bannor had this to say: "Having the licence to practise is different from an operational licence. The law requires you to procure a licence from us and since you have failed to do so, we have no option but to close down the facility.”

He subsequently ordered the staff of the hospital to vacate the premises, including three people who had come to seek assistance after which the facility was put under lock and key.

In the case of Grace Diagnostic Centre, the owner of the facility (name withheld) had a conversation with Dr Bannor on telephone, claiming he had initiated processes to secure a licence.

Dr Obenfo-Andoh and a staff at the Grace Diagnostic Centre, who received the team from HeFRA, were whisked to the Greater Accra Regional Police Headquarters for further questioning.

Briefing the media after the exercise, Dr Bannor said the move had become necessary because it was noticed that some health establishments were operating below standard and many of them were either not licensed or registered with the agency.

He said all the institutions affected were given more than six months’ notice to register with the agency but had failed to do so hence the crackdown.

“It is regrettable that several attempts made by the agency to get them to comply with the law fell on deaf ears. HeFRA will no longer allow such facilities to continue to flout the law with impunity,” he said.
He appealed to the public to support the agency and report any health establishment suspected to be operating without a licence for action to be taken against it.