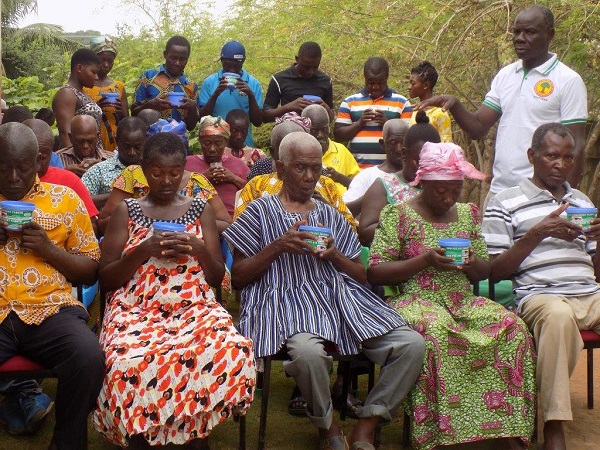 Some patients undergoing treatment at the Odopee Herbal Research and Learning Centre at Mankessim. Observing the process is Mr John Kofi Sackey, the herbalist (in white ‘T’ shirt)
30.5k Shares

A delegation from the national directorate of the Ghana Health Service (GHS) in Accra has visited the Odopee Herbal Research and Learning Centre in Mankessim in the Central Region to assess activities at the facility.

Led by Dr James Addy of the Institutional Care Division of the GHS, the team inspected the certificates and licences of the centre and citations and recommendations from institutions to the herbalist, Mr John Kofi Sackey.

The eight-member team also observed how the herbal drug was administered on patients and interviewed some of the cured eye patients.

Members of the team also took the telephone numbers of some of the people who had made claims of regaining their sight, the dates and the names of the hospitals which diagnosed them to be visually impaired before visiting the herbal centre for treatment.

Dr Addy said they would reach out to those hospitals for their folders of the cured patients to ascertain if they actually received treatment at those hospitals before resorting to herbal treatment.

The leader of the delegation advised Mr Sackey to collaborate with the Saltpond Government Hospital by sending eye patients who attended the centre to the hospital for medical screening before attending to them and resend them to the facility for another examination after their treatment at the centre.

He further urged Mr Sackey to send his herbal medicine to the Mampong Centre for Plant Medicine Research and the Noguchi Memorial Institute for Medical Research for testing.

Among the patients interviewed by the medical team last Thursday was 52-year-old Wilberforce Andrews, who is the Chief Finance Officer of the UN Youth for Human Rights Africa and Chairman of the UN Advocacy for Coming Change.

Narrating what he had gone through to the GHS delegation, Mr Andrews said a chemical compound, hypochlorite, exploded into his eyes in 2017 and rendered him blind for over three months.

According to him, he sought medical treatment at the Cape Coast Teaching Hospital, where an eye specialist told him that he was going to be blind for life.

Mr Andrews said a relative took him to the Odopee Herbal Research and Learning Centre and within two weeks of herbal treatment, he regained his sight.

He said thereafter, he led a team of medical doctors to the facility to observe Mr Sackey’s work and had also conducted his own research on the herbal centre for a year and found the herbal preparation potent and the first of its kind in the whole world.

Mr Andrews seized the opportunity to appeal to the government, non-governmental organisations (NGOs), corporate bodies and individuals to support the centre to treat more eye patients.

Another cured eye patient, 60-year-old Esi Kwakyewaa from Enyan Denkyira, told the GHS delegation that she had cataract in both eyes, had the left eye damaged during a surgical operation at a hospital and only had her sight restored at the Odopee Herbal Centre.

Mr Sackey thanked the GHS team for the visit and promised to abide by the advice and the recommendations given.