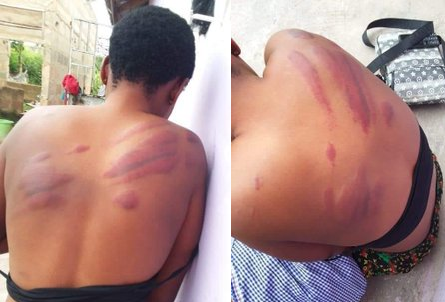 The Headmaster of Jachie Pramso Senior High School in the Bosomtwe District of the Ashanti Region, Mr Francis Donkor has been interdicted pending investigations into the alleged brutalisation of a female student.

The Ghana Education Service (GES) in a Facebook post on Wednesday, September 8, 20201 has directed the headmaster to hand over the administration and management of the school to the Ashanti Regional Director of Education.

Pictures of the female student spotting bloodied cane marks on her bare back went viral on social media on Tuesday, September 7, 2021.

The victim, a 19-year old is a final year General Arts student.

According to sources, the headmaster subjected the student to several lashes of the cane for giving her jacket to a male colleague who had been penalised.