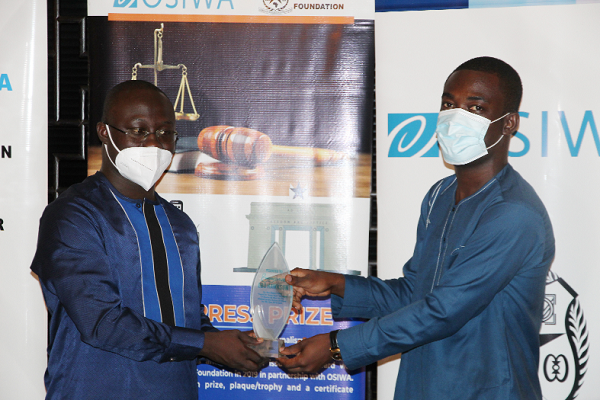 Daily Graphic’s Court Reporter, Mr Emmanuel Ebo Hawkson, and three other journalists have been honoured with the Article 19 Press Prize awards for producing compelling stories that highlighted the ills of the country’s criminal justice system.

Mr Hawkson won the award as the first runner-up with his story titled, “Caged for Seven Years,” which was published on the front page of the Daily Graphic on March 3, 2020.

“Caged for Seven Years” tells the story of Charles Twumasi, an innocent man jailed for seven years on an allegation of defilement.

He, however, regained his freedom after a lawyer at the Legal Aid Scheme, Mr Saani Mahmoud Abdul–Rasheed, successfully appealed his conviction.

The other winners are Joojo Cobbinah of the Multimedia Group (who emerged the overall winner) and Edward Adeti of EIB Network, the second runner-up.

A reporter of TV3, Beatrice Spio-Garbrah also received a special award for her story “Lack of Juvenile Correction.”

Article 19 Press awards derives its name from Article 19 of the 1992 Constitution, which guarantees fair trial for any person charged with a criminal offence.

The award winners were presented with plaques and cash awards.

Mr Hawkson dedicated the award to Charles Twumasi, the subject matter of the story, who spent seven years for a crime he did not commit.

He lauded Mr Saani Mahmoud Abdul–Rasheed of the Legal Aid Scheme, who fought for Twumasi’s freedom.

“In spite of the difficulties and challenges at the Legal Aid Scheme, Mr Abdul-Rasheed and other lawyers continue to lead the fight for justice for ordinary people who do not have the means to afford the services of lawyers,” Mr Hawkson said.

The criminal justice system, he said, needed urgent reforms right from arrest to investigations and prosecutions.

“We must also strive to implement non-custodial sentences to depopulate the overcrowding prison system,” he added.

The President of African Heights Foundations, Mr Dennis Armah, a legal practitioner, commended the awardees for putting up great works which, according to him, had influenced the justice system of the country.

He also encouraged them to not relent but to rather continue to do more to help address the weaknesses in the justice system and make it fairer for everybody.

Mr Armah also encouraged other media practitioners in the country to develop interest in court reporting to ensure consistent coverage in the judicial system.

His reason was that there were always interesting matters happening in the court, especially in criminal cases as well as cases concerning people’s right which were consequential to the general human right framework of the country.

He, therefore, urged them to understand the criminal justice system so they would be in a better position to cover cases fairly and correctly.

Going forward, Mr Armah called for more transparency in the justice system so that it would represent everyone in society, whether victims of crime or accused persons and added that “So that once you go through that system, you will know that what happened was fair in the overwhelming majority of the cases and was consistent with what the law is and what we expect our right to be under the law in the country”.