The event which took place at the company’s headquarters at Adabraka in Accra, saw many staff members of the GCGL, as well as other members of the public, queue to donate blood.

The NBB recently announced that its stock had depleted and appealed to the public to help replenish it. The exercise by the GCGL was, therefore, in response to that appeal.

In a chat, the Managing Director of the GCGL, Mr Ken Ashigbey, indicated that the company had decided to make voluntary blood donation by staff members an annual event.

He said there was no substitute for blood and impressed on the public to see voluntary blood donation as a call to save lives.Saving someone’s life by donating blood gives one satisfaction, Mr Ashigbey added.

The National Director of the NBB, Dr Justina Ansah said with a population of more than 25 million, the country needed to have in stock 250,000 units of blood all the time but had usually had only 150,000 units.

She said only 5.6 per cent of the public donated blood and described the figure as very low.

She, therefore, called on members of the public, aged between 15 and 60, who were healthy, to consider blood donation as a civic responsibility and assist to restock the NBB. 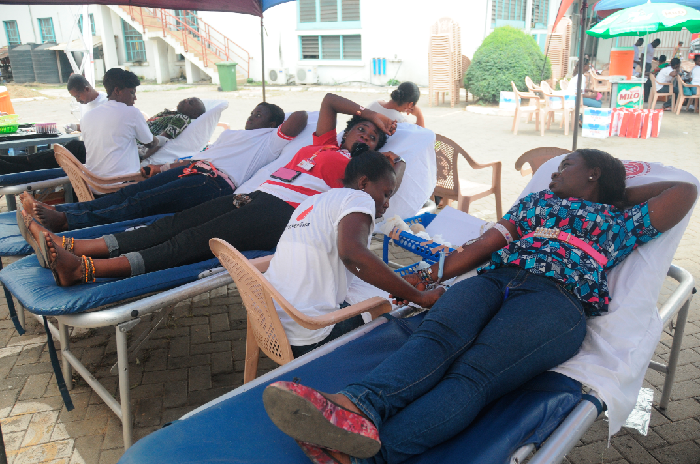 Turning the spotlight on the safety of the blood donated, Dr Ansah said most of the country’s neighbours had recorded 100 per cent certainty that blood donated would not cause adverse effects when transfused.

Ghana, on the other hand, had recorded 35 per cent certainty.

A 60-year-old donor, Mr Delphinus K. Nordor, told the Daily Graphic that the donation was his 69th, explaining that he did that periodically because he believed that was the only way he could contribute to saving lives.

A broadcast Journalist, Mr Kwaku Narteh Siatey, who said he had been donating blood for the past 10 years, also appealed to the public to be patriotic and donate blood to increase what was available at the NBB.

Lintex Ghana Limited presented five crates of Malta Guinness to the GCGL to be distributed to the blood donors.