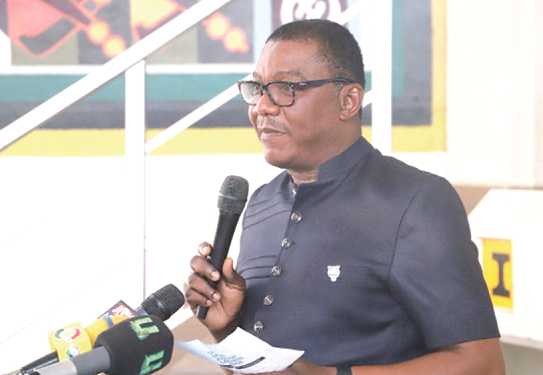 Mr Kobby Asmah, the Editor of the Daily Graphic, speaking to participants in the event. Follow @Graphicgh

Attitudinal change is the antidote to the sanitation challenges facing the country, the Editor of the Daily Graphic, Mr Kobby Asmah, has observed.

In that case, he recommended that non-conformists be dealt with decisively and punished accordingly.

Mr Asmah, who was speaking at the Ashanti Regional Stakeholder Dialogue on Sanitation in Kumasi yesterday, said the development was one of the reasons the Graphic Communications Group Limited (GCGL), with sponsorship from Zoomlion Ghana Limited (ZGL), was undertaking the year-long sanitation awareness programme.

He said the dialogue, which would be organised in all the regions, was to whip up the interest of the citizenry to improve on their sanitation practices and also complement the national sanitation campaign by the Ministry of Sanitation and Water Resources christened: ‘Change Your Bad Habit’.

All hands on deck

Although the editor acknowledged the need for the government and other stakeholders to invest in sanitation, he said without a change in attitude by the people, all the investment would come to naught.

He said the fight to keep the environment clean required the participation of all and sundry, and not only duty bearers.

According to him, good sanitation practices should start from the individual at home before its ripple effects could be seen on society.

“To keep Ghana clean would require all hands on deck. Everyone has a responsibility to ensure that he or she cleans the environment. When it comes to sanitation, it is not an individual business; it is a stakeholder involvement which includes all of us,” he said.

The Amakomhene, Nana Adu Mensah Asare, who represented the Asantehene, Otumfuo Osei Tutu II, at the dialogue, asked policy makers and metropolitan, municipal and district assemblies (MMDAs) to always involve traditional authorities in their programmes, particularly those that affected the lives of the people.

According to him, more often than not, policies were made without involving chiefs, even though chiefs were the leaders of the communities.

He commended the GCGL for leading the discussion on sanitation by initiating the dialogue, which he said would remind the citizenry of their obligations towards the environment and the need to keep it clean.

Nana Asare said gone were the days when chiefs wielded power to compel people to undertake communal labour to clear their immediate surroundings of fifth.

He said with the advent of democracy, chiefs had lost grip on their communities and were unable to enforce certain laws, lest they be dragged to court.

The Chief Operating Officer of the Environmental and Sanitation Cluster of the Jospong Group of Companies, Mrs Florence Larbi, for her part, said with increasing population, it was becoming difficult to get large tracts of land to be used as landfill sites.

She said that required that new approaches be adopted in waste management, including the establishment of treatment plants and transfer stations, to reduce the turnaround time for intermediary service providers.

She said there was the need to establish more transfer stations in the metropolises, where tricycles, popularly known as Aboboyaa, could deposit waste and go back to the communities to pick more waste, instead of travelling long distances to the dumping sites.

According to her, because the dumping or landfill sites were far from the city, most of the tricycles were unable to get there, with some disposing of the waste in gutters and streams.

Mrs Larbi said Zoomlion was building waste treatment plants in every region to turn the waste into raw materials for other industries.

For his part, the Ashanti Regional Director of Environmental Health, Mr Don Awantungo, called for investment in sanitation to keep the country clean.

He said environmental health workers were poorly resourced, which reason they were unable to deliver on their mandate.

He said while public education was necessary to ensure that the people respected the laws of the land and kept their environment clean, there would be the need to invest in the sector and resource the officers to enable them to go to every nook and cranny of the country to enforce sanitation laws.

At the end of the dialogue, it was the recommendation of the participants that there should be increased public education on sanitation and to remind the people of the need to keep the environment clean.

They also called for the enforcement of bye-laws to serve as a deterrent to violators.

Furthermore, they cautioned power brokers to allow the district assemblies to do their work without any interference.

In addition, there was a call for the involvement of traditional leaders in all deliberations that affected the communities.