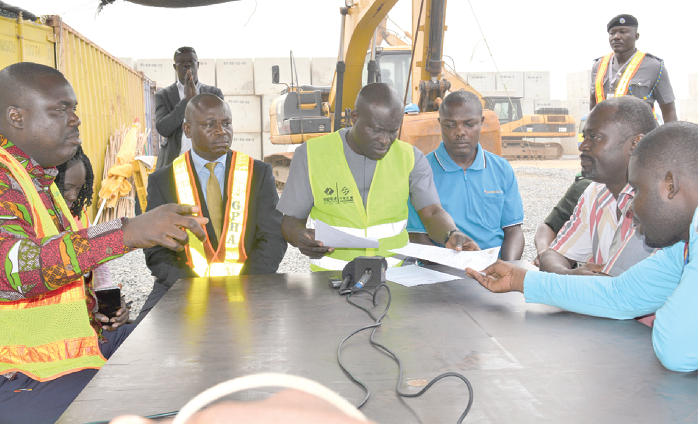 The Ghana Ports and Harbours Authority (GPHA) has stopped works on a jetty and storage facility under construction in Tema to receive liquefied petroleum gas (LPG) from vessels.

It follows what officials described as the failure of the owners of the facility to secure the necessary partnership and permits from the authority.

The facility, located at Bankuman, near Tema Newtown, has a 600-metre long jetty built into the sea to receive vessels that will call at the facility to discharge imported LPG products.

Construction works on five 100-tonnes storage tanks to hold LPG imports for distribution to oil marketing companies (OMCs) as well as work on office space to accommodate workers of the company were also stopped.

The acting Director General of the GPHA, Mr Paul Asare Ansah, who led a team comprising the Deputy Transport Minister, Mr Daniel Titus-Glover, and officials of the GPHA to the facility, ordered the immediate suspension of works until the necessary permits were obtained.

Mr Ansah has also directed the security department of the authority to liaise with the Tema Regional Police Command and the Eastern Naval Command to ensure a 24-hour surveillance on the facility to avoid any form of diversion of imports through the illicit facility.

There are concerns that such unregulated developments could compromise national security and further promote illegal importation of ammunition and drugs into the country.

Mr Ansah expressed worry that although the country’s ports had stringent security measures in place there had been attempts to import and export illicit drugs and ammunition through them.

“It’s not a bad idea to attempt to invest in the maritime sector but in doing so, they must be developed within the port authority’s master plan for port developments in Ghana. The authority in the execution of its mandate is permitted to invite the private sector for partnerships in such ventures,” he said.

A Director of LIB Limited, promoters of the project, Mr Divine Akortia, told the team that although he had secured approvals from the Ghana Maritime Authority, the Environmental Protection Agency (EPA) and the Tema Metropolitan Assembly (TMA), permits from the GPHA and the National Petroleum Authority had not been approved even though they had presented documentations to them.

For his part, Mr Titus-Glover, who is also the Member of Parliament (MP) for Tema East where the project is situated, pointed out that the nature of the development required the GPHA’s involvement.

“Their engineers and technical people must ensure that the development falls within the port authority’s master plan,” he said.

He chastised the owners of the company for commencing the project when they had not sorted out issues on permits with all the relevant bodies.