Govt to legalise Zongo Development Fund to ensure its sustainability 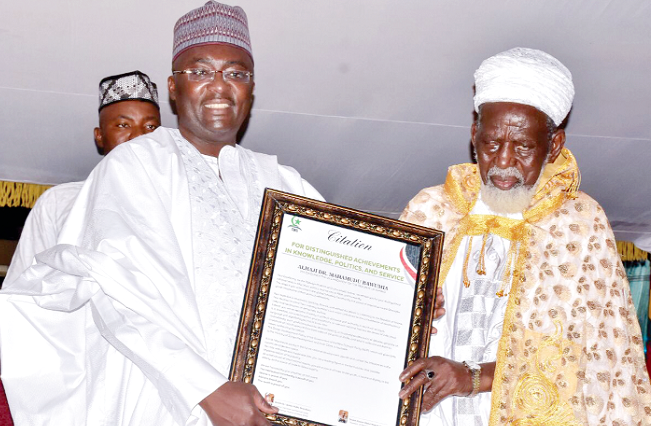 The Vice-President, Alhaji Dr Mahamudu Bawumia, has announced that the government will soon introduce the necessary legislation to provide permanent funding for the Zongo Development Fund to ensure its sustainability.

The reason, he said, was to ensure that no government used the excuse of no funding to scrap it.

Speaking at the 49th annual celebration of the birth of the Prophet Muhammed, organised by the Tijjaniya Muslim Mission at the Aboabo No.1 School Park in Kumasi, Alhaji Bawumia said: “In line with our agenda for the transformation of Ghana, we made a case and said since independence in 1957 no budget of Ghana has dedicated funds for the transformation and development of Zongo communities in particular. We said if Allah gave us the way, we would establish a Zongo Development Fund to address the issue. Allah has given us the way and in our very first budget Nana Addo Dankwa Akufo-Addo has established the Zongo Development Fund."

Going beyond the promise

He said President Akufo-Addo did not only establish the fund but also appointed a Minister for Zongo and Inner City Development.

The Vice-President said in the 2017 budget, the government provided GHc219 million for the Zongo Development Fund, saying the amount was the equivalent of the budget for five ministries.

"So it shows that we took it very seriously. It is not a token, and when we pass the law, Insha Allah in the next few months we’re going to make sure that it is in the law.At least the equivalent of $50 million will be in that fund every year, so that no government can come and say there is no money for Zongo development. It will be in the law and we will make sure it happens,” he pledged.

While commending the Tijjaniya Muslim Mission for its commitment to provide educational facilities, including efforts to set up a university, Vice-President Bawumia gave an assurance of the government’s commitment to begin paying Arabic tutors this year, while working towards making Arabic examinable at the junior and senior high school levels.

He called on all Ghanaians, especially Muslim youth, to take advantage of the business-friendly policies contained in the maiden budget of the Nana Akufo-Addo government to venture into business and wealth creation.

Sheikh Sharabutu and Vice-President Bawumia were presented with citations for distinguished achievements in leadership, service and knowledge.