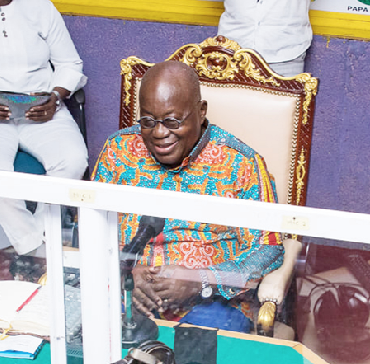 President Nana Addo Dankwa Akufo-Addo has said the government is on course to vaccinate 20 million of the country's population against COVID-19 by the end of the year.

He said so far more than 1.3 million people had been vaccinated, with plans far advanced to expand the vaccination exercise in the country.

President Akufo-Addo was speaking in an interview with the Ghana Broadcasting Corporation’s FM station in Sunyani during his two-day working visit to the Bono Region.

The President explained that as of last Monday, more vaccines had arrived in the country and expressed the hope that by the end of the month additional consignments would be in.

President Akufo-Addo said compliance with the COVID-19 safety and hygiene protocols and the vaccination exercise were the best ways of defeating the pandemic in the country.

He said the fight against COVID-19 was not an easy one, but “the government is determined and will continue to fight against the pandemic in the country”.

He said there were already structures available for the mass deployment of vaccines, explaining that the preparations made during the outbreak of Ebola and the general vaccination of the population against fever and cholera had given Ghana an advantage over its sister African countries.

“The infrastructure is available to be used to deploy mass vaccines. However, ways and means to get the vaccines are what we are working hard to acquire to enable us to vaccinate majority of the population,” he stated.

The President said he had been lobbying and begging for vaccines from other countries to ensure that the majority of the population was protected against the disease.

He said the government had set up a committee, under the leadership of a former Minister of Environment, Science, Technology and Innovation, Prof. Kwabena Frimpong-Boateng, to formulate a concrete road map for the domestic production of vaccines.

He said the committee had gone a long way with the road map, and explained that the idea of the government was to make the country self-reliant by producing its own vaccines against COVID-19 and other diseases to come.

“We need to produce our own vaccines and be prepared for a future outbreak of diseases,” he stated.

The President said the government would soon cut the sod for the construction of 111 district hospitals across the country.

He said all was set for the start of the hospitals, explaining that lands had been acquired and contractors identified and given initial seed capital to enable them to start the projects.

He said the effort was to strengthen the health system, adding that, that was vital due to the nation’s growing population.

President Akufo-Addo called on the chiefs and the people of the region to support various government flagship programmes.

“I believe and have hope that public support for the government’s flagship programmes will help in the development of the country,” he said.