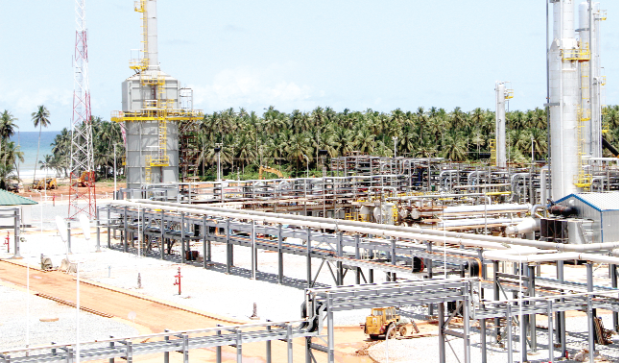 The government has signed a tie-in agreement with the West African Gas Pipeline (WAGP) for the reverse flow of gas from the Western Region to Tema.

Under the agreement, the Ghana National Gas Company (Ghana Gas) pipeline in Aboadze in the Western Region will be tied in with that of the WAGP to make it possible for gas transmission to fire thermal units in Tema.

This means that first gas from the Offshore Cape Three Points (OCTP) Sankofa Fields, which is expected to be shipped ashore by the middle of next year, can now be safely delivered to the thermal units in Tema as well.

Currently, gas from oilfields in the western coast only terminates at the Aboadze thermal enclave in the Western Region.

The Daily Graphic has gathered that initially Ghana wanted to purchase outright the over 250-kilometre Tema-Takoradi stretch of the WAGP, but the shareholders did not agree with that proposal.

The company rather made a counter-offer to transport Ghana’s gas across the corridor in reverse flow to Tema for about $5 per a million British thermal unit (MMBTU), which the country considered too expensive.

A source close to the negotiations said the government and the Volta River Authority (VRA) went back to initial negotiations with the WAGP, which agreed to transport gas from Aboadze to Tema at a reduced rate of $1.3 to $1.6 per MMBTU.

Ghana will receive gas from the OCTP field for about $7.5 per MMBTU.

“We have reached an agreement to transport gas from Takoradi to Tema. However, work is currently ongoing on the contracts and documentation, which are synonymous with agreements of this nature,” the source said.

It expressed the commitment of the WAGP to ensure that fuel was available to Ghana to permanently deal with the debilitating power crisis which had hindered growth significantly.

The move, according to some industry experts, was timely and strategic and would save the country a lot in terms of cost reduction and community and environmental risk if the country had constructed its own pipeline from Aboadze to Tema.

That conclusion is premised on the fact that per the contract with the OCTP partners, if the gas off-taker, the VRA, fails to take the gas, the partners will apply the take-or-pay clause enshrined in the contract, which could result in a serious financial and legal challenge between the country and the partners.

A take-or-pay contract is a rule enjoining the off-taker to pay for the resource even if it declines to receive or utilise it.

A Deputy Minister of Energy, Dr Mohammed Amin Adam, had said at the Petroleum Commission’s Local Content Conference in Takoradi last week that the ministry was involved in the execution of “a determined gas infrastructure programme expected to be completed next year”.

“This will include the completion of the tie-in of the Ghana Gas pipeline to the West African Gas Pipeline before the end of the second quarter of 2018, as well as associated modification work on regulation and metering stations in Takoradi and Tema,” he said.

As part of the project, he said, work on the onshore receiving facility (ORF) by ENI at Sanzule was also progressing steadily to receive gas ashore.

With additional gas from the OCTP, in addition to gas from Ghana Gas, the volumes are inching towards 400 million standard cubic feet (mmscf) daily, which is beyond the daily requirement for the thermal power units in the Aboadze power enclave.

The volume to be produced by the Sankofa Gas Project is estimated at between 171 and 210mmscf/d of non-associated gas. Ghana Gas has the capacity to deliver 150 mmscf/d for power generation.

Therefore, the tie-in for the reverse flow and the negotiation of the price for both the raw gas and its cost of transportation are timely for the country.

Dr Adam also announced the relocation of the 470-megawatt Karpowership to Takoradi on the completion of the regulation and metering station to connect to the natural gas for cheaper fuel to fire the plant.