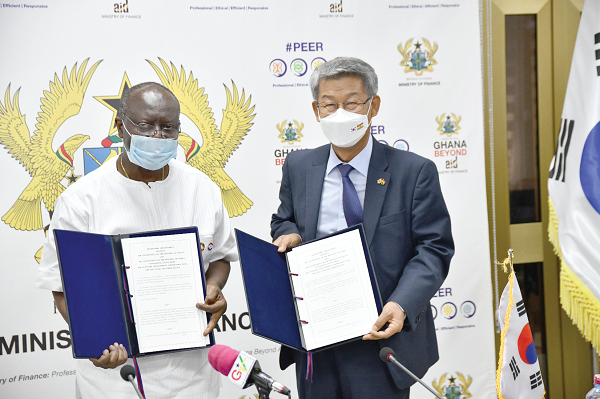 Mr Ken Ofori-Atta (left) and Ambassador Kim Sungsoo displaying the documents after signing the 2020-2021 framework arrangement between the Government of Ghana and the Government of the Republic of Korea. Picture: EBOW HANSON
30.5k Shares

The government has signed an agreement with the government of South Korea for concessional loans of up to $400 million under the Economic Development Cooperation Fund (EDCF) framework.

The loans will be used to finance five key projects, including the Techiman Water Supply project, expected to cost $100 million; the $60-million COVID-19 emergency response programme; the modernisation of the Regional Maritime University (RMU) at $140 million and the improvement of the Volta Lake Transport system, costing $100 million.

The funds will be disbursed between now and 2022.

Speaking at the signing ceremony in Accra yesterday, Mr Ofori-Atta said the Ghana-Korea bilateral cooperation dated back to 1977 when both countries first established diplomatic relations.

Since then, he said, there had been several bilateral engagements between the two countries, culminating in the Korean government providing Ghana with appreciable support for the implementation of a number of development programmes and projects.

He said the doubling of the amount was in response to a request by President Nana Addo Dankwa Akufo-Addo for a $1-billion support from the government of the Republic of Korea.

Over the last three years, he said, the government had taken steps to create an enabling environment for the private sector to flourish.

“Tax reforms have been introduced, inflation and interest rates are on the decline and the exchange rate has also been stable,” he said.

Mr Ofori-Atta also noted that to accelerate economic growth and development, the government had developed an ambitious plan for the transport sector to provide the needed and cost-effective base to make Ghana more competitive in this fast-paced era of globalisation.

“The objective is to develop an intermodal efficient, high density transport infrastructure which is interconnected and makes use of our vast water bodies for both passenger and freight.

“The government is also using ICT frameworks, such as computing resources, the Internet and mobile telephony, to enable business activities and services such as e-commerce, e-government, online social network, online teaching and for resource mobilisation,” he said.

With South Korea among the highest ranked countries in the world in the area of ICT and innovation, he said, the government was looking forward to that country’s support in the development of Ghana’s transport and ICT sectors.

For his part, Mr Sungsoo said since 1990, nine projects, amounting to $354 million, had been funded by the EDCF in Ghana.

They included the Wa Water Supply Development Project ($55.5m), the Prestea-Kumasi Power Enhancement Project ($67.2 million), the establishment of the University of Environment and Sustainable Development ($90 million) and the Northern Ghana Rural Electricity Infrastructure and Access Project ($68 million), he said.

He expressed the confidence that the five new projects under the framework would support the health sector and the economy of Ghana and drive a new wave of world-class developments.

“We are in a hurry, as President Akufo-Addo once said. The world is changing fast and Ghana should catch up with the forerunners as soon as possible and bring prosperity, welfare and happiness to the people of Ghana.

“Korea is proof of this endeavour and Ghana can do much better avoiding the trials and errors Korea made in the past,” he said.