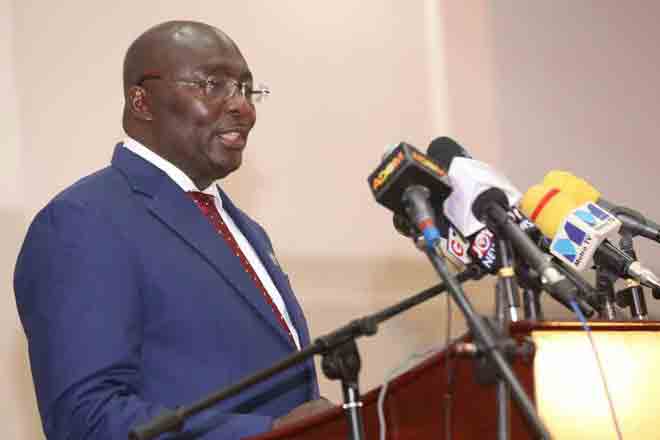 Vice President Dr Mahamudu Bawumia has disclosed that so far, a total of 16.5 million digital addresses have been captured as part of moves by the government to create a national database of digital addresses for all geographical locations in the country.

“It is unbelievable. We have been able to put together 16.5 million digital addresses. Every 5 by 5 metre square in Ghana has a unique address. When you look at the post-code, you will be able to immediately tell the region, district and the address,” the Vice President said with glee.

The Vice President said this when he was the guest speaker for the 3rd Advancement Lecture Series organised by the Institutional Advancement Office of the University of Cape Coast (UCC) on Wednesday.

It was on the topic “Developing Stronger Economies for the African Continent: The Missing Link” and chaired by the Vice Chancellor of the UCC, Professor Joseph Ghartey Ampiah.

The Vice President, eliciting a thunderous applause from the audience, said “what is very interesting is, because we are focused on value-for-money, when we were looking for this digital addressing system, we had all sorts of proposals. Someone said 70 million dollars, another said 100 million dollars and so on.”

“But finally,” he reported that, “after all the work that was done, this massive system that is going to transform this economy, was only done for USD$2.5 million.”

He said when the idea of what the country required in putting up the digital addressing system was planned, there were doubts if the capacity for its execution by Ghanaians was possible “but they surprised us,” he said.

Dr Bawumia recounted that when the government came into force, its desire was to use the existing technology to establish a national digital system.

That task that the government set out to do, he said, had been accomplished.

He said the system was going to provide the most advanced addressing system in the world.

“It is more advanced than the United States, the United Kingdom or Sweden or Germany because they are stuck with old technology. We are leapfrogging. We are going to GPS-based technology,” he detailed.

Also, he said, the technology would allow the Waake seller in any part of the country to say “this is my address and the system will take you exactly where she is”.

Dr Bawumia also announced that the online registration of businesses would kick-start in two weeks’ time to afford businesses the opportunity to register their businesses online without hassle.

With the new system, he said, it ought to be possible for business registration to be done in a day or few days as compared to the months and longer periods that prevailed in the past.

Touching on the theme of his presentation, the Vice President said although Ghana, for example, graduated from less developed economy status to lower middle income country status in 2007, the recent fall in world commodity prices of oil, minerals, and cocoa, ought to be a reminder of how vulnerable the economy was to external shocks.

“We are faced with the risks of being trapped in this LMIC status if we don’t push our productive capacities beyond the mere extraction and exports of raw commodities,” he stressed.

We want a Ghana in which we add value to our raw materials. We want a Ghana beyond aid. We want to build a knowledge based economy. To do all of these, we must build our productive capacity as a nation: This is the missing link to building strong economies in Africa.

He said a country could attain low middle income status by tapping into its natural resource endowments, by undertaking appropriate market and financial sector reforms, and by opening up external trade opportunities, through good macroeconomic management and through good and stable governance.

But global experience, the Vice President said, was that the continued march to full middle income and further to high income economy was possible only when the country had put in place national mechanisms to building productive capacity.

“Ultimately strong economies are built on the back of strong, and steadily expanding productive capacity and on sound economic governance,” he re-echoed.

Roles to be played

Going forward, he said, the UCC had a role to play as a University.

“Nurturing and stimulating creative thinking, undertaking basic research in problems confronting society and informing public policy making are the least we should expect from universities,” he urged.

Dr Bawumia said universities could not afford to decouple themselves from tackling the challenges in the society. Rather, he said, they ought to see themselves as also at the heart of helping to build stronger economies and stronger societies.

“It is quite disturbing for example that the entire GDP of Sub Saharan Africa, a significant chunk of Africa, is only just about the GDP of South Korea,” he bemoaned.

Over the years, he said, international financial institutions such as the World Bank (WB) and the International Monetary Fund (IMF) had prescribed conflicting solutions such as the Structural Adjustment Programme (SAP), Economic Recovery Programme (ERP), Highly Indebted Poor Country (HIPC) Initiative among others, presumably to remedy the problem.

Those interventions, he said, had only yielded a relapse or a side effect while bypassing the crux of the matter.

He said the Advancement Lecture Series 2017 was held to explore the weighty matters within the context of the economies of African countries through the lens of African scholars and politicians.